Burn Out by Ruthi Kight Review with Excerpt & Soundtrack 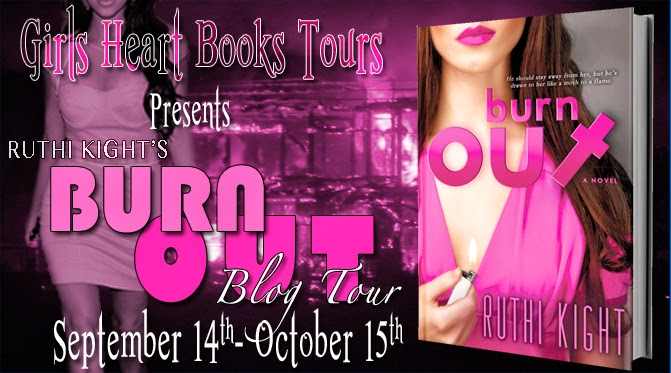 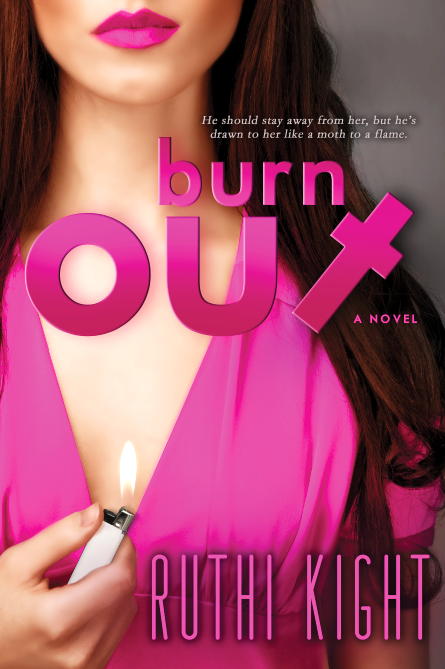 Ten years ago Delia’s life went up in smoke. Literally.

After a decade of hiding, she is forced back into the world.

With only her wits to guide her, she must now figure out how to live in a town that knows her only as a murderer.

Her family is gone. The people all fear her. She has nothing holding her in Sunny Shores...until she meets Liam.

He’s heard the stories. He knows he should stay away from her, but he’s drawn to her like a moth to a flame.

Life seems to be looking up for them...until her past comes back like a bitch slap to the face.

pt:
The loud grumbling of my stomach caught both of our attentions and I laughed. Yes, laughed. Cringing would have been more appropriate, but at that point, I had already made an ass out of myself so, why worry?

“The fried mushrooms are pretty good. They’re usually mushrooms, so that’s a plus.” I raised my eyebrow and waited for him to finish. Instead, he returned his attention to his book.

“You’re seriously ending it like that? What do you mean ‘usually’?”

“I get them at least once a week, and most of the time I end up eating mushrooms. But sometimes…it’s like a potluck dinner. You never know what’s under the wrapping, but by that point you’re too damn hungry to care. You just eat it.”

It actually didn’t sound too bad. There had been plenty of foods that I had consumed whose origin was still unknown. “Fried mushrooms it is.” I closed the menu and laid it on the table. I could feel Liam’s eyes on me and when I looked up, I was right. He was staring right at me, an intense look on his face. “Either you need to shit, or you find it fun to stare at the freak.”

He shook his head and winced. “Neither, actually. Why do you call yourself that?”

How was I supposed to answer that without telling him exactly who I was? There’s no easy way to let someone know that you were a freshly sprung mental patient with a penchant for setting loved ones on fire. Shit. The truth would make him run for the hills.

“Does it matter? It is what it is.” The waitress chose that moment to come to the table. I ordered the mushrooms and a glass of water. Once she walked away, I stared down at the table. Maybe he would think I was immensely entertained by the cracked plastic table top, instead of the truth: I was avoiding him.

“Okay. So you’re a freak. That works.” I looked up when he spoke, taken aback by his ability to let the subject go. He smiled and set the glass down. “Next question then. Read any good books lately?”

I laughed and covered my mouth. “Really?”

“You asked me about the weather before. So books seemed like a good topic to go with next. Do you read?” I shook my head no. “No time for it? Or no interest?”

“Neither. All the time in the world and none available. Boxers or briefs?” I smirked as his face turned a bright red.

“Neither.” He wiggled his eyebrows at me, causing a blush to creep up on my face. “Romantic or comedy?”

I stared at him for a moment, confused as to what he was asking. He didn’t laugh this time. His mouth hung open in shock, which made me giggle uncontrollably. “What?”

“Oh shit. You’re a pod person. I knew it.” He closed his mouth and leaned back against the hard booth.
“Who the hell doesn’t read, doesn’t have a preference in movies, and asks someone about the weather when they were just outside enjoying it?”

I shifted uncomfortably, feeling like a caged animal once again. There were no walls closing in on me this time, but his judging eyes were enough to condemn me. “Whatever. Like that shit is important.”

1) My Songs Know What You Did in the Dark- Fall Out Boy
2) Fire Starter- Demi Lovato
3) The Lazy Song- Bruno Mars
4) Grenade- Bruno Mars
5) Ooh La La- Britney Spears
6) Scream & Shout- Will.I.am & Britney Spears
7) Blow Me (One Last Kiss)- P!nk
8) One More Night- Maroon 5
9) Dark Side- Kelly Clarkson
10) Distance- Christina Perri
11) Feel This Moment- Pitbull and Christina Aguilera
12) Beautiful Goodbye- Maroon 5
13) Crazy Train- Ozzy Osbourne
14) Jar of Hearts- Christina Perri
Click here to listen
My Review: 4 1/2 stars
I really enjoyed reading this book. It was different from the beginning, which is always a good thing for me. Delia was so intense and so honest with what she felt. I really enjoyed those qualities in her. I liked that she found Liam, but then was so disappointed right along with her when she found out why. I was broken hearted after what happened to Mike; but things were already going back in the right direction by then. Some people are just cruel, and that's what happened to Delia. The end of the book was, as Ruthi said, true to Delia and what she wanted. Sometimes, it's not about what you have, but what you need. Delia got what she needed.

About the Author:
Ruthi Kight currently lives in her hometown of Columbia, SC, with her fiancé and five year old daughter. She has an unhealthy addiction to books, music, and chocolate, but not necessarily in that order. When her dream of being a rock star didn't work out, she focused on her other passion: writing. She is the author of Knotted Roots, a YA Coming of Age story, and is currently working on two other novels that are due out this year.