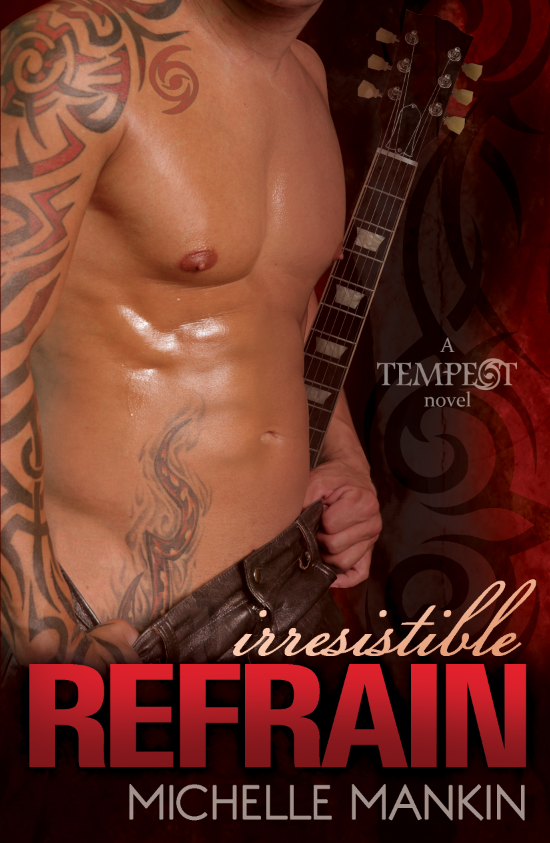 Blurb-
Two years ago everything changed for the remaining members of the Seattle rock band Tempest.
Two years is a long time.
Too long to keep on remembering.
Not nearly long enough to forget.
In trouble with nowhere else to go songstress Lace Lowell seeks refuge with the band during their stop in New York City. It's a risky move for her because they are both there, two impossibly good looking men whose lives are inseparably entwined with hers. One who bruised her heart and one who smashed it into pieces.
Warren “War” Jinkins, the mercurial lead singer of Tempest, has always had a thing for Lace. But then again so does his best friend and band mate.
Bryan “Bullet” Jackson, the sinfully handsome tat-sleeved lead guitarist, has a bad boy reputation befitting his nickname. For the past two years Bullet’s had a rule with the groupies: one time, never twice, leave ‘em satisfied, but always leave ‘em.
Two guys, one woman, and a host of dark secrets all together within the tight confines of a tour bus as the group travels cross country.
Can the past be forgotten and buried?
Will friendships prevail?
Or will the three of them succumb to seductive impulses too addictive to resist?

** Irresistible Refrain is a gritty rock and roll tale intended for mature readers seventeen and up. Contains sexual situations, strong language, and drug use. ** 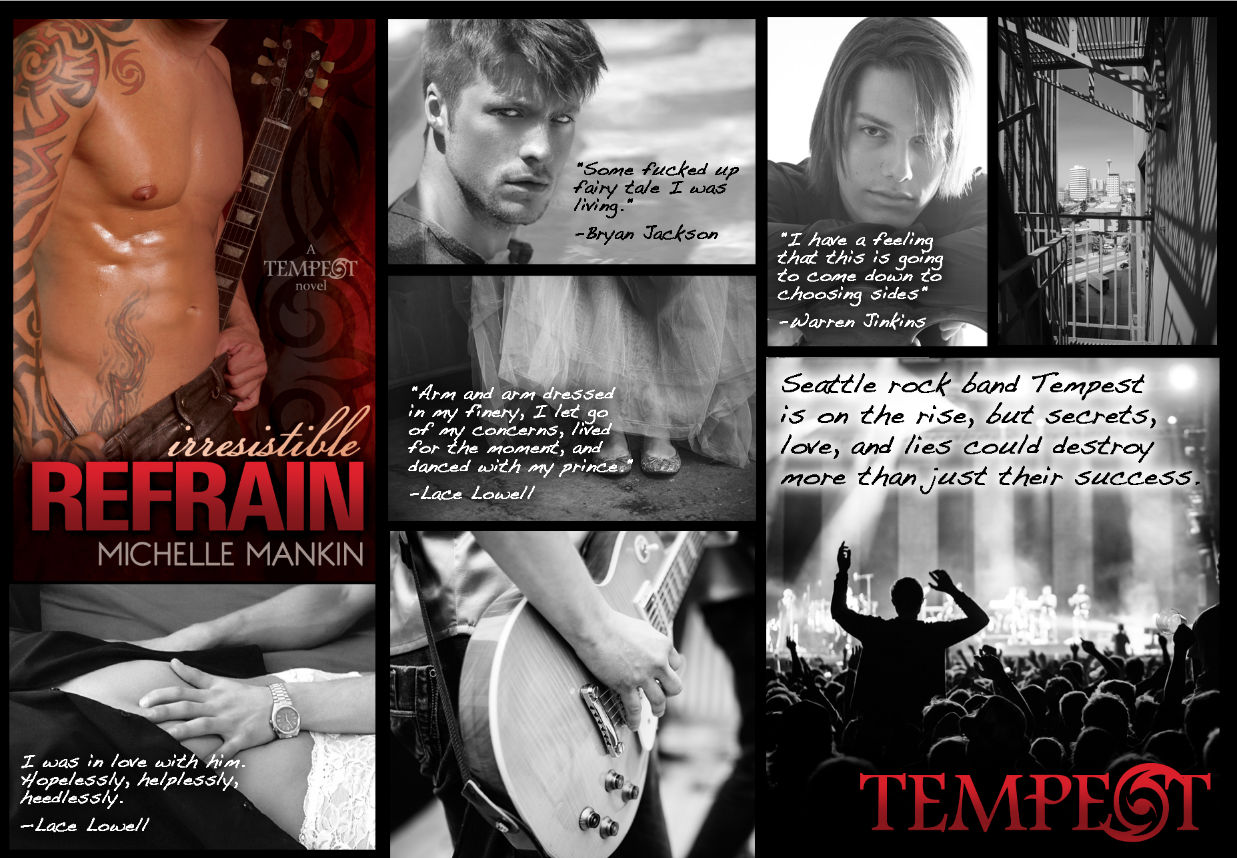 My Review: 5 stars
This was a fantastic read from start to finish. First of all - LOVE the band name of Tempest!! I enjoyed the flashback chapters, so you could get caught up on what had happened to bring all these people to where they are today. Much the way that real bands are; a lot of people are only in it for themselves, and sometimes it ends friendships and destroys people. Using people and drugs are only a means to an end for some, unfortunately. The struggles of not only keeping a band together, but of also not giving in to the temptation in front of Bryan (Bullet) everyday, in addition to keeping his friendships as solid as possible has been a daily struggle for him. Lacey also has challenges, she believes one thing about Bryan, but has also been unable to put him out of her mind. Warren (War) seems to be one thing, then as the story moves along, becomes something entirely different.  I admired Lacey's determiniation to pull herself together on her own. While at the same time I enjoyed watching Bryan come to the realization that he had made a mistake, and tried to fix it. I loved the ending!! I can't tell you what happened, but it was just so romantic and sweet. Literally going to be waiting for the next book with anticipation. This was well written, carefully thought out book with great characters and a fantastic storyline. I will be keeping an eye out for anything else from Michelle, that's for damn sure. 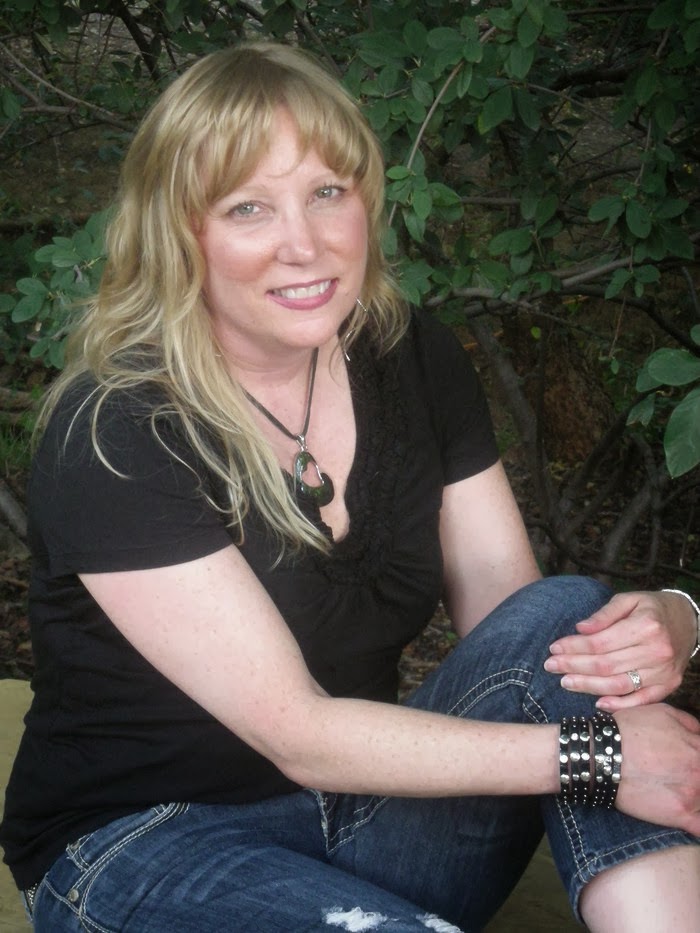 Michelle Mankin is a young/new adult romance writer as well as a self-proclaimed giant…inside her own mind.
For many years, she toiled in the insurance industry as an underwriter. Somehow, the boredom didn’t kill her, and the hours of looking at facts and figures provided ample time for her mind to wander.
Love Evolution, Love Revolution, and the latest novel, Love Resolution are rock ‘n roll romances. The first is based on Shakespeare’s Twelfth Night, the second on Much Ado About Nothing, and the third on The Tempest. The first three books in the Black Cat Records series combine the plot underpinnings of the famous playwright with the drama, excitement, and the indisputable sexiness of the rock ‘n roll industry.
When she is not putting her daydreams down on paper, you can find Michelle traveling the world with her family. Sometimes for real and sometimes just for pretend as she takes the children to school and back.