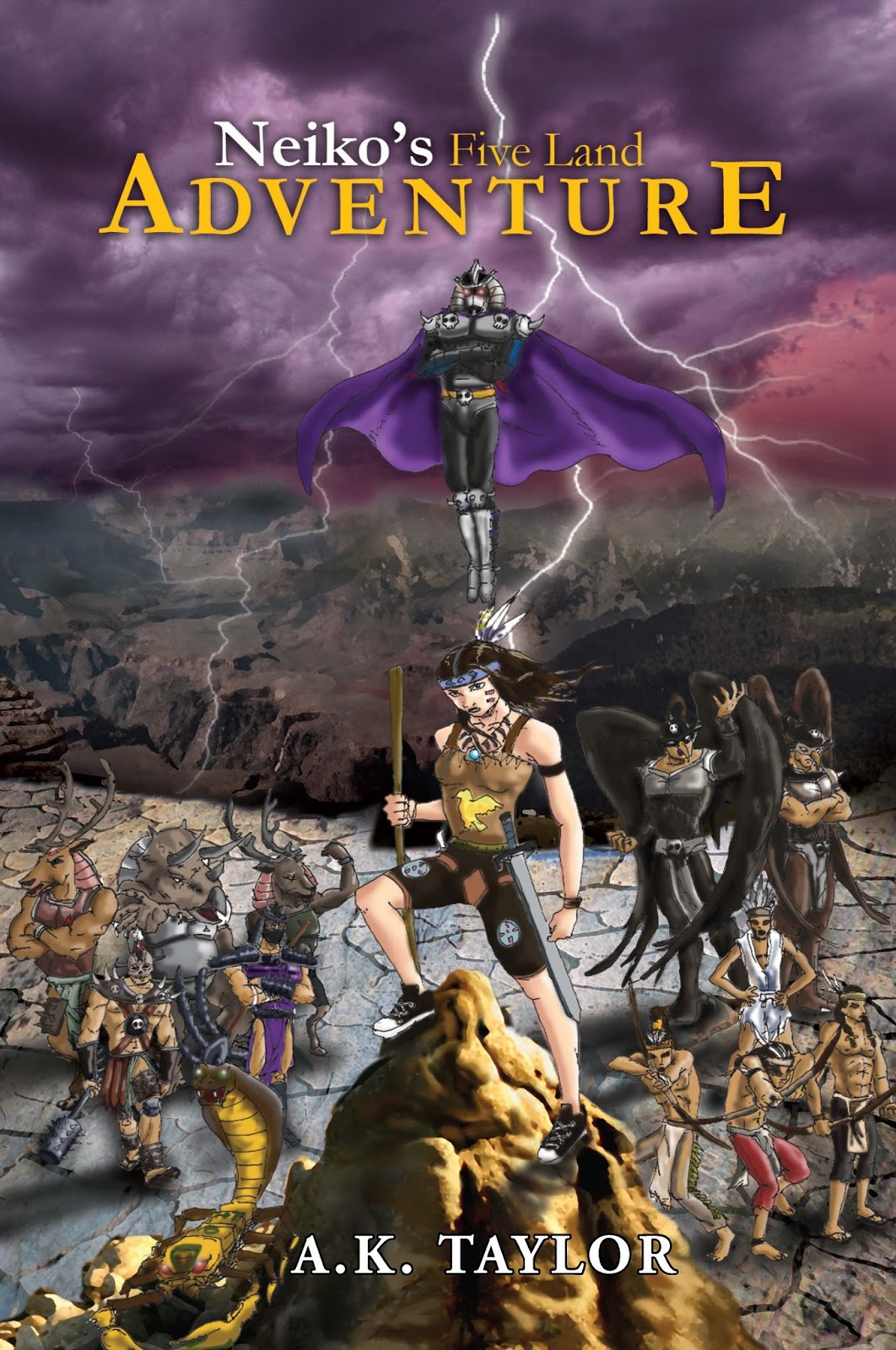 Book Description:
The Indians and the Crackedskulls are locked in the turmoil of war and presently in a stalemate. Her enemies, Raven and Bloodhawk, have come up with a scheme to up the ante and break the stalemate into their favor. Neiko later finds out that a land she thought she had only imagined is actually real and contains a legendary and otherworldly evil within it. Not only that, she becomes trapped there and must escape the world, the people within it, and the sinister evil within.

Neiko must find her way back home and turn the tables on her enemies. Can she come back home and escape the evil that seeks to claim her?

Neiko’s Five Land Adventure  Excerpt:
After her eyes adjusted to the glare, the two friends could see there was a cavern that was full of perfect crystals. They were in all shapes, sizes, and colors and they came out of the walls, floor, and ceiling. The beauty was spellbinding. “Wow! If I found this in Hawote, then I’d be rich! This is a rock collector’s dream come true!”

“Yeah, but didn’t you say that there were writings about Ramses somewhere in here? I wonder where the ruins of Shadazar are,” Quickstrike rambled.

“Somewhere in here, I guess, and I think we’re close. Let’s keep walking and look at the walls. If there are any branch-offs, then we’ll split up. If you find anything, then come looking.”

“Actually, I’d rather stick together, so we won’t get separated.”

“Good idea, well, I like that idea better too,” she said as they journeyed deep into the caverns. They walked and looked at the walls, but all they found were arrangements and shapes created by crystal; they gleamed and sparkled when the light hit them like multicolored diamonds. Luckily for them, there were no branch-offs, and the caverns appeared as if they were carved into the crystal. New formations were growing in the hewn walls.

Neiko found several broken pieces on the cavern floor; she picked them up and slipped them into her pocket.

“Look, there’s an exit up ahead,” said Quickstrike as he saw a break in the glamour and a darkened cave. As they entered the door, darkness overtook them and there were ruins just ahead. “We found what’s left of ancient Shadazar!”

“Yeah, and we have an underground lake to cross. I wonder what’s on the other side.”

“There’s a boat right there.” They climbed into the boat, and Neiko got the oars and began to paddle while Quickstrike carried the torch. They could see broken columns and the remains of a bridge that possibly was a shortcut long ago towering over them. She kept paddling, and then they saw a waterfall just ahead. Neiko paddled around it and parked the boat on the bank of the hidden cavern. When they entered the hallway, there were pictures and writings. “Neiko, look! We found it!”

“Hmm,” she said as she looked at the letters which were surprisingly in the alphabet of her tribe.

“Well, it’s written in English, but it is written in the alphabet of my tribe. This will be easy for me to translate.”

Neiko looked at the battling figures and the dark, shadowy form of the Dark Pharaoh fighting and slaying them. She ran her finger under the letters as she read. “This is talking about something called the Good Pharaohs. It says that God created powerful beings called Pharaohs to protect the universe from evil. 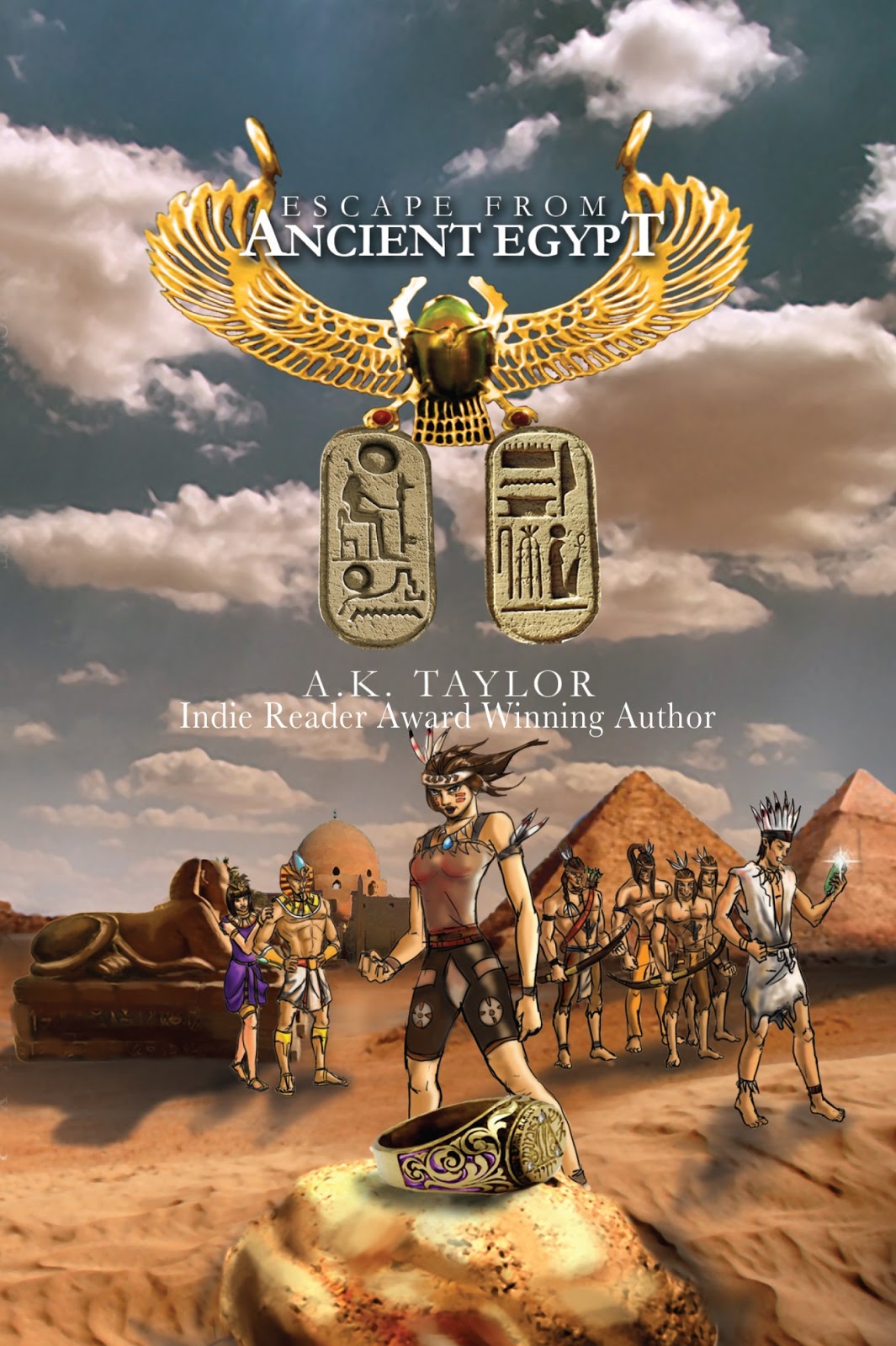 Seeking his revenge on Neiko for exposing him, Francesco banishes Neiko into ancient Egypt just like he did her friends eleven years ago. During her stay there, she unravels the mystery of what happened to her four friends. Now she’s faced with a bigger problem—how to get home. After a series of unfortunate events, Neiko is now entangled with Pharaoh Ramesses II. Francesco also comes to make sure their fates are sealed. Can Neiko and her friends beat impossible odds and return to Hawote and back to the present?

Neiko’s vision turned from the green light to the world spinning around her in dizzying speed. Neiko wasn’t moving, but she felt like she was in freefall—like someone had cut the cable from an elevator and she was plummeting with it. Descending in what—space and time? The evergreen and colorful deciduous vegetation of the Hawote woodlands changed to a desert with a river with some greenery and palms nearby. The cool autumn air of Hawote in October transformed into stifling, searing, dry heat. Pyramids, sphinxes, and strange statues spun around her after her house, porch, and front yard disappeared within the vortex. It was nighttime in Hawote, but the sun rose and set as time flew by—from west to east--backwards. Beneath her bare feet the wood from her front porch turned to nothing then into hot, soft sand.

Neiko’s world stopped spinning, and the sun was high in the sky. Neiko watched the sun to be sure it didn’t move again. Wherever she ended up, she guessed the time must be about high there judging by the sun’s position in the sky after a few moments of observation. The heat was intense, and she discovered she must be somewhere far from home. “Where?” was the ultimate question. A gust of wind blew the feathers in her long, black hair. Her hair wrapped around her face, and she brushed it back. Sweat beaded out on her body, and she tugged at her shirt and headband. “Phew! It’s hot out here! Where am I--Death Valley?” she asked. Death Valley was the only desert place she thought of off the top of her head. She had never been there, but she’d read and watched TV programs about the place. She looked around, and a city was only a few feet away. She could see the buildings down below from the high dune where she stood. She took a deep breath and fingered the fringed sheath of her knife to reassure her confidence—without thinking and by instinct. Then after a few more seconds, she trudged down to the city in the soft sand from the dune to go find some answers.

Neiko entered the city still dressed in her buckskin, decorated warrior clothes and painted for war. As she took in the sights and from the confusion, she had forgotten she was armed. Her machete was sheathed to her back, and so was her knife on her side. Incense, perfumes, and music filled the air. She didn’t recognize any of the smells, but the music seemed to be like Egyptian reenactments in movies. The buildings were white alabaster covered in brilliant wall paintings. Some men rode on camels like horses and others led them by a leash. Chariots cantered by. Neiko looked around in amazement. This ruled out Death Valley, Arizona. Neiko lifted her eyes to the sun to get a bearing on north. North was as good of a direction as any to begin a search for answers. After her eyes fell from the sun and to the north, she could see the Pyramids of Giza towering in the distance. She recognized them instantly. She had seen enough pictures and documentaries on the monuments—they were unmistakable. Even though they were miles away, they towered above the city and in view. This definitely wasn’t Death Valley.

In that case I can get on the first flight home, she thought. She believed that she had landed in Cairo. This city came to mind because it's the only one close to the Pyramids of Giza. Then she realized she didn’t have any money as she put her hands in the pockets of her buckskin shorts and only felt the house key. She had left her wallet in the car back at home when she left from Phoenix’s house after the battle.

“Well, I can probably make up some story that I was abducted or something—which is sort of true. Really funny, Francesco. I guess you meant no way back since I’m broke. I’ll hitchhike back to Hawote if I have to. I’ll scrounge around to see if I can find some change for a pay phone on the road,” she remarked to herself, and maybe the phone book would have some information on where to find an airport or something. But, then again, would the phonebook be written in English or Arabic? It was a chance she had to take. The worst that could happen was not getting anywhere.

Neiko began walking to find help, change, a pay phone, the U.S. Embassy, an airport, or whatever she could find first. After a few more minutes of exploring, she recognized the clothing of the people: white linen kilts, some wore robes and fine jewelry, some wore headcloths while others did not. No one seemed to be dressed like the Arab residents of 21st century Egypt. “Why is everyone dressed like ancient Egyptians?” she asked herself. She wondered if this was some sort of a cult or a weird secret society that lived like the Amish in Cairo.

A small group of armed soldiers marched in front of her, but they didn’t pay any attention to her. They carried swords, shields, spears, and were dressed in ancient Egyptian armor. She had seen it in books and movies. They weren’t carrying guns or dressed in desert camouflage BDUs like Egyptian soldiers of the 21st century.

She headed farther in to the marketplace. It was obvious since people had shops and bazaars selling goods. People were yelling and haggling. People thrust things at Neiko trying to entice her to buy. Neiko put up her hands and shook her head. She couldn’t understand a word anyone was saying. Funny, no one seemed to be selling T-shirts, souvenirs, or that type stuff for tourists. Quite frankly, no one seemed to be selling any maps.

Neiko walked up to a man who was a merchant at a bazaar. He was selling all manner of fine jewelry. Heavy collars, bracelets, necklaces, arm pieces, earrings were on display. All gaudy like the ancient Egyptians liked. “Excuse me, can you tell me where I am? I seem to be lost. Do you know where I can find a map or where the airport is? A phone?” she asked as she made her hand like a phone and put it to her ear; her thumb the earpiece and her pinkie the mouthpiece.

The man looked at her startled because of her strange appearance and because he couldn’t understand her. He was dressed in linen like everyone else and sported some of that same Egyptian bling since he was a successful jeweler.

“That’s a little out of style, don’t you think? I mean, guys don’t wear eyeliner…and, that skirt and that sheet on your head are not how people dress nowadays. People dress like ancient Egyptians only on Halloween. Last I checked it was still three weeks away,” Neiko said to the man as she shook her head. A.K. Taylor grew up in the backwoods of Georgia where she learned about nature. She enjoys hunting and fishing, beekeeping, gardening, archery, shooting, hiking, and has various collections. She also has interest in music, Native American history and heritage, Egyptian history, and the natural sciences. A.K. Taylor has been writing and drawing since the age of 16. A.K. Taylor has graduated from the University of Georgia with a biology degree, and she shares an interest in herpetology with her husband.