Napoleon (Layers of Veronica #1) by Emilia Rutigliano with Review 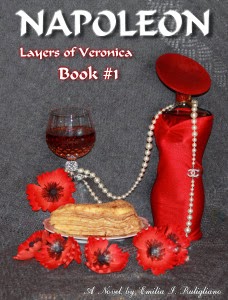 Synopsis:
They say that when a student is ready, a teacher appears.
What they don’t say is where to register, and how to matriculate in that teacher’s class.
That is a divine gift.
Veronica had it all: the looks, the brains, the personality and the wardrobe. Not to mention a perfect husband, a fabulous career and two adorable children, until the perfect husband leaves her for another woman.
Thus begin the daily routines of a typical New York City immigrant with ambition whose teachers keep appearing, and for whom divine interventions keep affording new opportunities. The new American Dream. Though it starts like ordinary connections going through the tried and true, each relationship continues to delve into parts of her own universe that Veronica didn’t know existed. A universe that is suddenly open to her.
It’s lovely when a brilliant virgin of meager means and a heart of gold meets a brooding billionaire whom only her love can tame… and they wed, have children and live happily ever after. But what about the other eight or so billion people on earth?
What if you are thirty-five, and not ready for a retirement community? What if marriage and hearth aren’t your cup of tea – even with the perfect man? What if there is more than one man – why do you have to choose? What if motherhood wasn’t your only self-definition? What if the kindest, brightest and wealthiest people that extended an invitation to join their world – would you take it – despite their many eccentricities? Why do you have to stop being one thing, in order to become another?
What happens when you reach the glass ceiling? How do you get to fly in the open sky?
It’s a matter of knowing that you can…
And you can…
Buy link -  http://www.amazon.com/dp/B00BQ157EG/

Damn, I should have worn a panty liner today! Was this an EBT or a modeling shoot?  Surgeons were notorious for their shitty personalities and their God complexes.  Well, forget the complex; this one WAS a god!  What the fuck?  He was 6’2”, broad shoulders, obviously worked out, thin waist, dark brown hair that was styled and cut perfectly in long layers, and green eyes.  Were those eyes even real?  Oh, and the dimples.  He had on tight jeans and a bright green sweater over a black t-shirt.  Did that sweater come with those eyes?  They are the same green.  He was, unequivocally, the best looking man she had ever seen.  He oozed masculinity; he oozed sensuality; he oozed sex.  There was so much oozing that this EBT was going to be difficult to conduct...and the reason had NOTHING to do with medicine.

This was going to be her dance.  Well, let’s check the dance floor, shall we?  Veronica continued to survey. I get to stare at him, and I’m allowed to do this!  I LOVE MY JOB!!!!!   She had the right; he was being presented for her dissection. It was fun to do with a surgeon.

Ben’s day suddenly took a turn for the better.  Now, this is a VERY nice surprise: something pleasant to look at.  They’ve already paid him for a day’s worth of testimony so he was theirs until six.

Ben was, of course, an amazing surgeon.  There wasn’t a single MD that didn’t believe he was the ultimate.  But, at 36, he didn't need to prove it to anyone.   Life had always been good to him, with just the one exception.  Great family; good grades; high school athletics; terrific friends; college, med school and an orthopedics practice where he flourished; beautiful wife; gorgeous twin girls; and the perfect life that was Westchester.  It was just a perfectly paved road to... boredom!  There was no one to relate to, not anymore.  Not for him.  So he spent many hours at work, lectured wherever invited, volunteered when he could at the clinics in the poor neighborhoods, worked out, and pretended to enjoy whatever social activities his wife planned out for them...which were many.  These court appearances and testimonies were a way to get away.

Ben had done this plenty of times, and he preferred the male lawyers.  Women were so busy trying to prove that they were just as good as their male counterparts, it was torturous.  They wanted to prove themselves; instead, they proved themselves insecure.  They asked way too many questions, most of them repetitive.  Eddie had said that it was going to be a man deposing him today, buthere sat this little fireball.  Well, hell, if he was going to stare at someone for three hours, it might as well be pleasurable.   She was too many mixes of “game on” to determine her background.

He liked her.  She was a red-head with green eyes and pale skin.  Well, not really a redhead. I wonder if the drapes match the carpeting? Dressed in black and cobalt, cashmere and silk; flawless skin, tweaked but not Botoxed.  Must be around 35; she kept all the imperfections on her face, which made her fun to look at.  And the “devil-has-my-soul” fire in her eyes?  This girl was a fighter.  She wore a Cartier Trinity ring on her wedding finger-- three intertwined wedding bands.   He knew this ring because he’d bought the trinity bangle for his wife this past Valentine’s Day.   She had on a working girl watch: an old, thin Panther.  If you didn’t know Cartier, you wouldn’t understand it.  There was no label or ostentation of the new designers.  The girl was a classicist.

“Dr. Kuhn.”  She acknowledged with a professional nod. “It's nice to meet you.  I'm Veronica Palese.”  She gave a non-subtle look to Eddie, as if to say: “Thank-you for this.”  Eddie acknowledged this by shaking his pointer finger at her, as if to say: “Behave yourself.”  This was done to put the good doctor in his place ... She had the control.

“You're Italian?”  He said with a slow grin, revealing those pretty dimples.  Men like this knew exactly how to disarm.


“Not at all!” She answered, smirking sweetly.

My Review: 4 stars
This one took me a little bit to get into it, but once I did. Wow! This was such a great story. I liked that Veronica didn't NEED a man, but chose one when she wanted. I also like that she wasn't ashamed of her sleeping with different guys. She's single, why not? Women have needs too. I think it's crap that women get labeled a whore if they sleep with different men, but if a man does it, it's perfectly acceptable. It's no different to me. I really liked the concept of the book, that there are layers to society, and boy are there. The men in Veronica's life took some getting used to, but they are all interesting in different ways. I'm looking very much forward to reading the next book whenever it comes out and finding out more about Ben, Jeremy, Anthony and KD. This was a great read with great characters, and it just flowed. Couldn't stop turning the pages once I got into it. 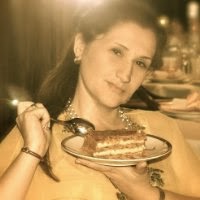 Emilia I. Rutigliano scored fiftieth percentile on her SATs... and on her LSATs... and on her BAR...Sigh...
But she nevertheless survived, and seems to be doing OK. She practices Law read lore) in Brooklyn, New York (read Nu Yawk). She was born in the former Soviet Union, and emigrated in 1979. She is happily married to the same crazy Italian she's been with since college, who suffers from a severe addition to travel (still in acute form). Together they are doing a somewhat passable job with their three precious darlings (who are now teenagers, thus elaboration is not necessary).
Which is why Emilia writes about Veronica. Veronica, though... is interesting. And Emilia knows interesting.
So she weaved the tale about the interesting characters, places and events from her own life. It is remarkable how if you choose to view a subject objectively, it becomes downright artistically gorgeous. So Emilia views and shows Brooklyn Russians as gorgeous, and the Barese intricacies as gorgeous, and she even tolerates Paris, Singapore, Vietnam and Malaysia for the reader's interests.
Thank you, dear reader, for tolerating these scenes....