It seemed only natural to nickname them the ‘Onslow Boys’. Every time they swaggered in the front door of the Onslow Hotel after a hard week’s work, their laughter was loud and genuine as they settled onto their bar stools. I peeked through the restaurant partition, a flimsy divider between my world and theirs. I couldn’t help but smile whenever I saw them, saw him ... Toby Morrison.


Quiet seventeen-year-old Tess doesn’t relish the thought of a summertime job. She wants nothing more than to forget the past haunts of high school and have fun with her best friends before the dreaded Year Twelve begins.

To Tess, summer is when everything happens: riding bikes down to the lake, watching the fireworks at the Onslow Show and water bomb fights at the swelteringSunday markets.

How did she let her friends talk her into working?

After first-shift disasters, rude, wealthy tourists and a taunting ex-boyfriend, Tess is convinced nothing good can come of working her summer away. However, Tess finds unlikely allies in a group of locals dubbed ‘The Onslow Boys’, who are old enough to drive cars, drink beer and not worry about curfews. Tess’s summer of working expands her world with a series of first times with new friends, forbidden love and heartbreaking chaos.

All with the one boy she has never been able to forget.

It will be a summer she will always remember.

Moon rays filtered through the windshield, giving the cabin an otherworldly glow.

Toby’s perfect teeth were illuminated when he smiled. “You know, you are the worst winner!” He shook his head. “Ever since you won the bet, you’ve been apologising. Just go with it, enjoy it, because I assure you, next time …” - he leaned closer - “… you will not be the winner.” He pulled back, smug.

He nodded. “I fully intend to redeem myself.”

“Want a chance to rebuild your shattered ego, do you? I bet you’re itching to fix my bike so you can be rid of me once and for all.” I shouldered him gently, teasing him as I would Adam. And then I realised what I had done; I had treated him like my friends. He looked down at his shoulder, then up at me. His eyes shadowed with untold meanings that I couldn’t read.

“What if I didn’t want to fix your bike?” he said in all seriousness.

“Why, is my company so stimulating that you can’t bear the thought of being without me?” I teased nervously.

I was aiming for light and airy, but something must have gone wrong with my delivery because Toby’s face went blank. He looked out into the lights of Onslow, ran his tongue over his bottom lip and sighed.


My Review: 5 stars
I felt so bad for Tess at the beginning of this book. Her ex-boyfreind is a huge jerk to her and humiliates her whenever he gets the chance. Adam talks Ellie and Tess into getting jobs at his Uncle's hotel over the summer, then he misses out on almost the entire summer because of an accident. One summer can change everything. And, boy does it. Toby, Sean, Stan, Ringer; they were all great guys. Those Onslow Boys were killer. Ellie and Tess meet them at the hotel where they're working. One thing leads to another and they all end up spending a fantastic summer together. Through the drama and the tears, they made friendships that would last, and maybe a little more too.

There were scenes in this book that had me laughing out loud, ones that made me sad and want to cry, and scenes that made me happy for the characters in them. The Onslow Boys remind me of guys I knew when I was Tess's age. Just a little older, a little more carefree, and a little wild. I loved the way the book ended, and I can truly say I'm really appreciating Australian writers these days. Some things sound a little funny, but eventually you figure out what it is they're talking about. CJ is one to definitely keep an eye on, I certainly plan to. 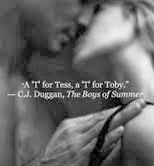 The Boys of Summer Music Playlist
Music to me is such a huge source of inspiration for my writing. It can set a mood, evoke a memory, transport you to an imaginary time or place, it's a powerful, magical thing.

Here is a list of what I was listening to at the time I was writing my novel. Some will be story specific and others are just what I happened to be into at the time.
So sharing is caring and hopefully it will also help set the scene and feel of my stories for you the beloved readers.

The Boys of Summer
Novel Specific

The Boys of Summer
Writing Music 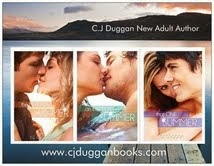 What inspired you to write the The Boys of Summer?
It was something that has been churning in my mind since I was a little girl, even if it was something no more mapped out than a group of friends hanging lakeside over a summer. It was an idea that has manifested into an entire world and I felt that I owed it to that eleven-year-old little me to develop it into a story. I know I was eleven because I had found an old exercise book with the story plotted out in my child-like handwriting and I could seldom believe it was something that had been swimming around in my subconscious for so long. It fell perfectly in line with me doing NaNo that year (National Novel Writing Month) and that was that, in one month I smashed out the bones of ‘The Boys of Summer’ (TBoS). In writing TBoS I really wanted to capture the essence of growing up in Australia. I set it in a small fictional lake side town in the 90’s to give it a certain flavor and provide a rich setting for a coming of age story, it is an absolute labor of love.

Does The Boys Of Summer have any parallels that could be drawn from your life?
I grew up in a small country town in Australia so I am well aware of what it’s like to have to make your own fun. Unfortunately our town wasn’t set on the banks of Lake Onslow but it was still a nice place to live. My first job was working as a barmaid at the local hotel and I remember the fear of my first shift and learning the ropes. The one thing I do love hearing is when a reader connects with my characters, I think there are parallels in not only my life when growing up but for many others too.


How long did it take you to write The Boys of Summer?
The Boys of Summer has proud roots formed in November 2011 NaNo month. National Novel Writing Month is a global activity where anyone can join in in the attempt to write 50k in one month. I thought it would be a bit of fun, and initially planned to tackle a edgier world gone wrong drama, but then The Boys of Summer seeped into my subconscious and completely took me over. I had such a clear, concise direction the characters had me going. I wrote in my blog the fear of not being able to ever replicate the joy of writing like I had writing the BOS. I managed to smash the quota with 77k for the month, and It took me  5 months to complete the first rough draft, and it was very rough! Then in a few months it was edited, re written, completely run through the ringer until it was polished. It took over a year in the mechanics to build the story, but it is a story that has been waiting to be written for a very, very, long time. It all just clicked in to place I am really fortunate that I had such a great time creating it.