Deep In Crimson by Sarah Gilman (A Return to Sanctuary Novel, Book 2) Giveaway with Review and Excerpt 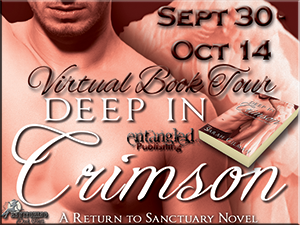 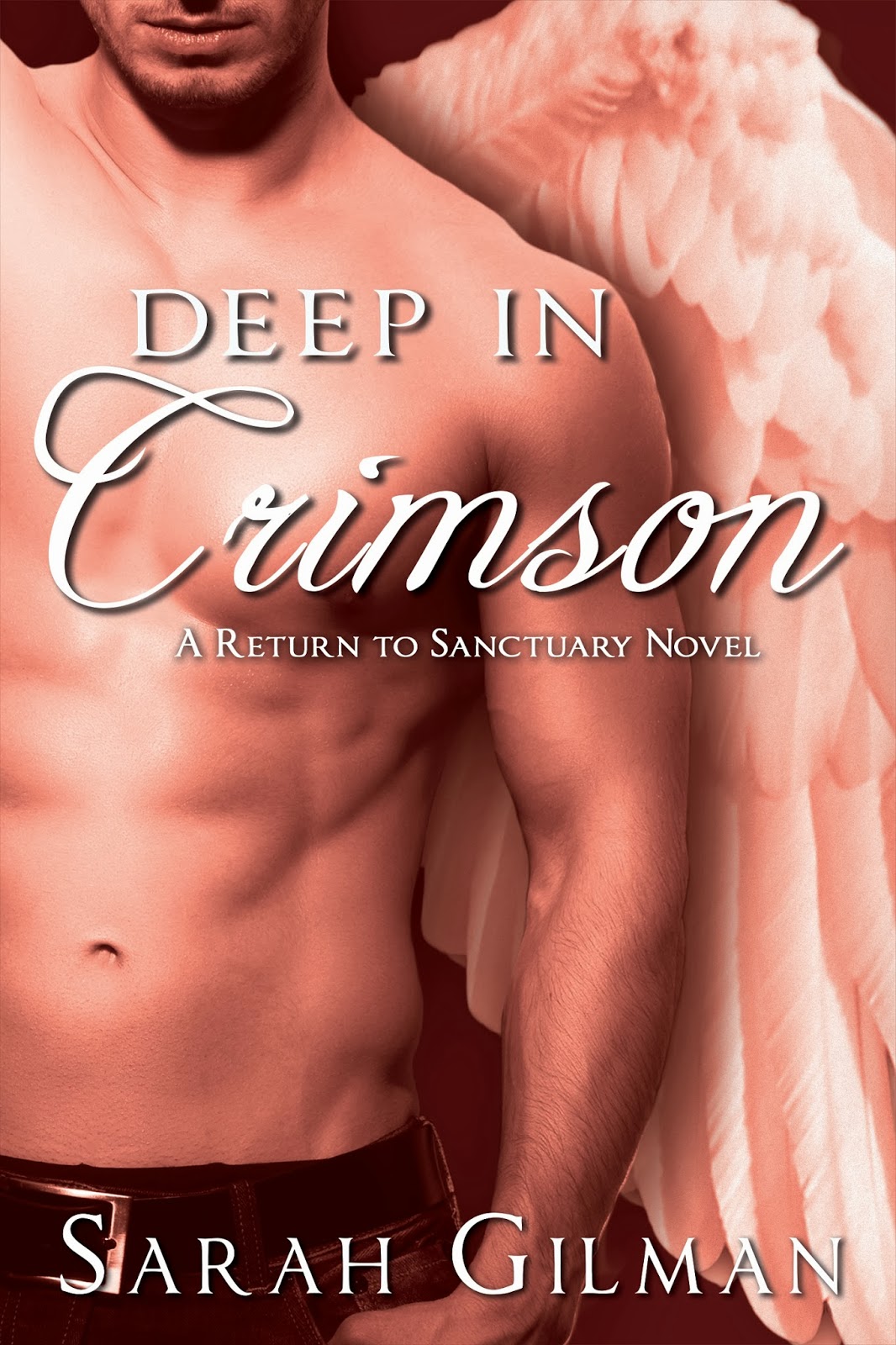 Kidnapped by humans and raised in a research facility, Jett was taught to believe his own race of demons insidious and violent. But a friendship with the archangel Raphael shatters Jett’s reality. Caught between two worlds, his first months of freedom find him lingering on the fringes of his home colony, Sanctuary.

When the human who stole Jett captures another demon youth from Sanctuary, Jett learns of the real plan—to steal Raphael’s archangel grandchildren. Jett wants to bring his captor to justice, but he must overcome the lies from his past and join forces with the demon Guardians, and the demon child’s older sister, Lexine.

Irresistible attraction grows between Jett and Lexine, but Lexine’s prophetic dreams of being mated to a poacher make her wary. And if Jett goes through the all-consuming process of becoming a Guardian, he may forfeit any chance they have of being together.

“What are you doing?”

At the raw shock in his voice, she paused, the cooling cloth pressed against the wound. “Has no one taken care of you before?”

He pulled away, but she gripped his arm.

“It’ll heal soon,” he said, his tone full of typical macho dismissal. “You don’t need to—”
“I want to. It’ll leave less of a scar this way.” She rinsed the cloth. So many scars covered him already, his back marred from what had to have been whippings. Many whippings. One more tiny mark would make no difference, but maybe a little tenderness would.

She applied cream and an adhesive bandage to the cut, then began to unravel the strips of cotton from his shoulder.

“Jett.” Leaving no room for argument in her tone, she held his gaze in the mirror.

He shook his head, but she ignored him and kept going, cleaning and medicating the gash across the front of his shoulder. She applied a real bandage. Instead of setting the tense male free, she soaked the washcloth again.

She pressed the cloth between his shoulders. He shuddered. Tending to the older wounds, she treated them with gentle care, as if the whip had sliced his skin only yesterday. His hands trembled a second before he curled his fingers around the edge of the sink.

Biting her lower lip, she moved to his sides and stomach, where the marks were thinner and strategically located. Surgical scars. An inner fire filled her. She would have ripped out Lawrence’s throat herself had the miserable excuse for a man been in the room.

Clusters of faint scars marked the back of his hand and inside of his wrists. She ran a fingertip over them. “What caused this?”

He answered in an even, controlled tone. “Needles and IVs.”

She swallowed against a rush of nausea.

Pulling his hand away, he sighed. He lifted his fingers to his face. She noticed for the first time a line of tiny needle scars on his cheeks, right over the venom glands. A whimper escaped her lips—heavens, considering the nerves associated with the venom system, needles must have caused him so much pain, comparable even to the whippings.

His eyes widened and he dropped his hand, as if just realizing he was touching his face. He cleared his throat and spoke, his voice thick and haunted. “There was a lab assistant who tried to be more humane about it, once. Against Lawrence’s instructions, she tried to take venom directly from my fangs, using a film-covered cup, like they do with snakes. But, I bit her. I was young and I didn’t understand it would kill her.”

Lexine ignited flames and pressed herself against his chest. “Biting when threatened is instinctive. The reaction is especially strong in children. Even in the best of circumstances, humans should never handle demon young.”

He tensed under her hold and took a step back, but she tightened her arms. She refused to let him distance himself, not at this moment. Perhaps no one had held him since his kidnapping, but he was so close to letting his guard down, she could sense it—she felt it in the slight tremor of his arms. If she let him run now, would they ever get to this place again, or would he build his walls even stronger and higher?

He wrapped his arms round her.

My Review: 4 1/2 stars
This was a really good book. Definite congratulations to the author for thinking up such an original concept. I love the fact that Sarah came up with really great lore, and am sorry that I hadn't read the first book, but I will go back and find it. I loved the way that Jett and Lexine had that spark of connection almost immediately. The storyline was great, as were the characters. The writing kept you turning the pages to find out what would happen next, and that's always a plus. I'm really looking forward to reading book three when it comes out.

Sarah Gilman writes wicked paranormal romance and fantasy in the Green Mountains of Vermont, where she was born and raised.