Falling For Her Soldier by Ophelia London with Giveaway, Excerpt & Review 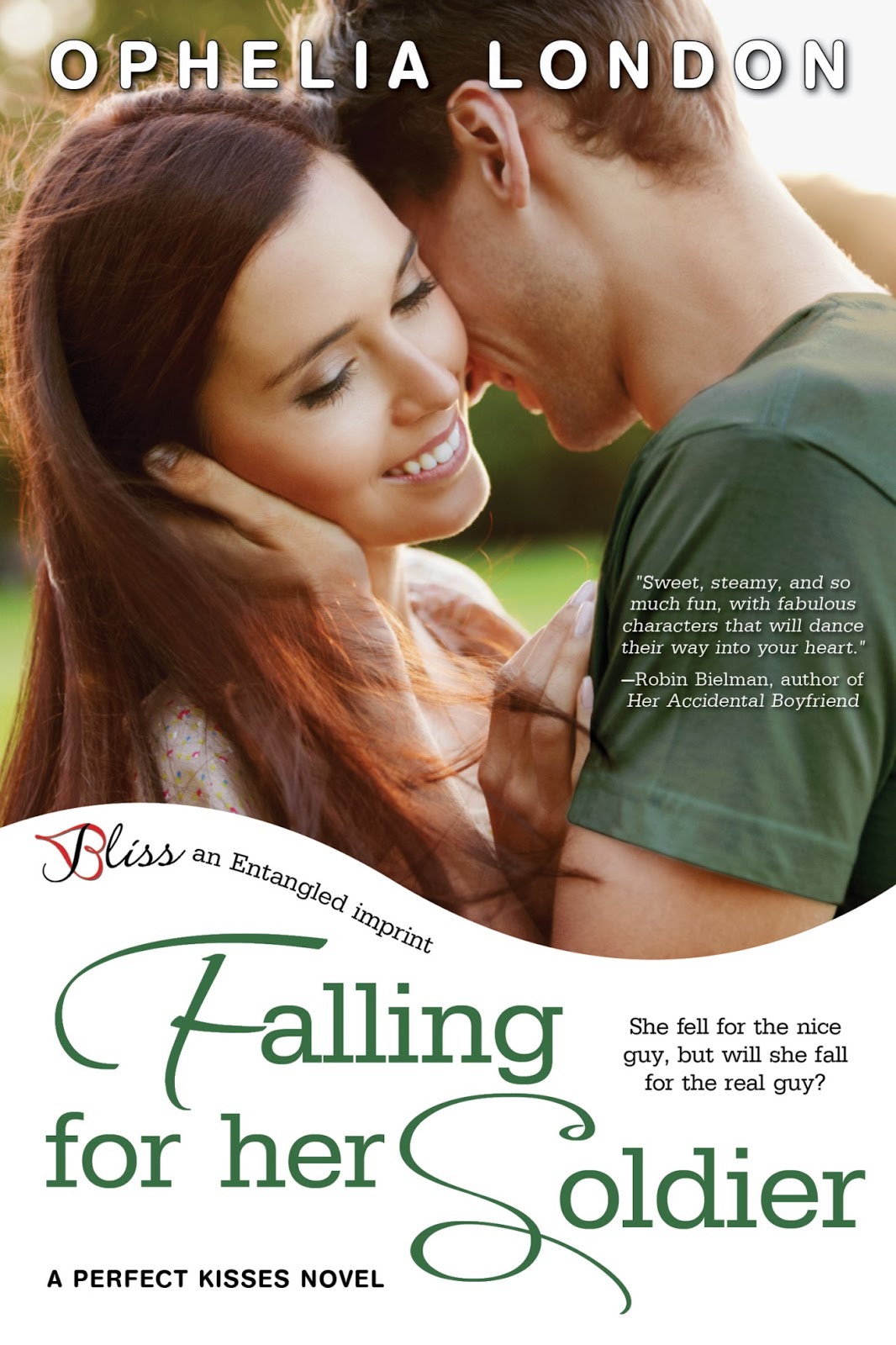 Book Description:
She fell for the nice guy, but will she fall for the real guy?

Ex-ballerina Ellie Bell has twenty-four days left until her self-imposed man-less year is up. No more falling for the wrong kind of guy—charming, sexy, bad. Why can’t she find someone sweet like Charlie Johansson, her soldier pen pal? His e-mails meant the world to her, and she can’t stop thinking about him…until she meets Hunter, whose muscles and cocky smile threaten to have her relapsing.

Before Charlie “Big Game Hunter” Johansson’s last tour of duty, he’d gone through women like crazy. But after connecting on a real, emotional level via letters with his best friend’s sister, Charlie’s ready for a relationship—with Ellie Bell.

But then her brother introduces him as Hunter. Proving he’s no longer a player by becoming Ellie’s dance partner for an Army benefit seems like it could convince both siblings he’s changed, but the harder he falls for Ellie, the harder it is to come clean. Can he convince her to fall for the real him before it’s too late?

Excerpt:
There wasn’t much eye contact with the tango, but Ellie couldn’t stop herself from peeking up at Hunter, expecting to find him all clench-jawed. But he was peering down at her, that anti–Fred Astaire gaze that made her core tighten, then burst into spasms.
His locked frame was suddenly not so locked, and he took her hand, linking his fingers through hers. Her breaths were becoming more and more shallow, reacting to his touch. A moment later, he moved his hand to her hip, where his other hand had wandered. He pressed his forehead to hers, like this morning, slowly box-stepping her to the rhythm of Elvis.
She held on to his elbows, letting herself be led, feeling her heart pounding as Hunter’s hands curled around her hips. And then, as naturally as how they moved to music, he tilted his chin and pressed his lips to hers.
It was like she’d been holding her breath for an hour and could finally breathe. She didn’t realize how much she’d been waiting for this moment until they broke apart, inhaling in unison, in perfect timing. His hot, firm mouth covered hers again.
He slid his arms around her back, holding her so tightly against him that her back bowed and her arms fell loose at her sides like she was floating, being swept away. His breath on her skin shot delicious shivers through her limbs. When her knees buckled, she didn’t think, she grabbed him around the neck, tasting his sweet mouth, never wanting the kiss to end.
He led her backward, still in rhythm, though Elvis’s voice had died out. Her back hit the wall and he leaned into her, pulling away from her mouth to smoothly maneuver to the side of her neck. Ellie sucked in a breath and tilted her head, giving him free access to whatever he wanted while she slid her fingers over the sides of his hair.
A tiny corner of her mind knew what she was doing might technically be against the rules—so many rules—but she couldn’t stop. He was so much fun and gorgeous, and
man alive was he a good kisser. Slow-slow-quick-quick-slow went her heart.
“Damn, I love the tango,” he whispered, tickling her ear.


My Review: 4 1/2 stars
I love a good book about our military. I love it even more when it's good, and this was. I really liked Ellie, she was strong, compassionate, caring, and such a good person. I wanted to punch her brother in the face for being such a jerk to her and his friend. Yeah, I know all about it. A guy doesn't want his friend and his sister to be messing around. I get it. But when you do what Sam did on purpose, not cool. Not to his sister and not to his friend. Hunter/Charlie was a good guy too. He knew what he was doing. He knew he had feelings for Ellie even before he met her. But he let himself get played by his friend, and he's the one to pay the price. Well, ok not the only one, but the one with the most to lose. I have got to say that I truly loved that last part at the fund raiser. That was amazing! I really enjoyed the epilogue too. I also rather enjoyed that Ophelia let people in on a glimpse inside military life. Because it's a different kind of life, a life you choose not just for yourself.

About the Author:
Ophelia London was born and raised among the redwood trees in beautiful northern California. Once she was fully educated, she decided to settle in Florida, but her car broke down in Texas and she's lived in Dallas ever since. A cupcake and treadmill aficionado (obviously those things are connected), she spends her time watching arthouse movies and impossibly trashy TV, while living vicariously through the characters in the books she writes.

Ophelia is the author of DEFINITELY, MAYBE IN LOVE, ABBY ROAD, and the Perfect Kisses series including: PLAYING AT LOVE, SPEAKING OF LOVE, and FALLING FOR HER SOLDIER (Jan 2014).

But don't call when The Vampire Diaries is on. 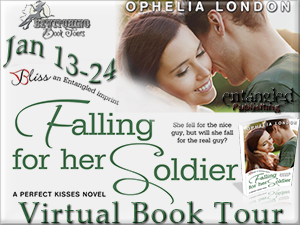