Once Upon a Tiger by Kat Simons with Giveaway, Excerpt & Review 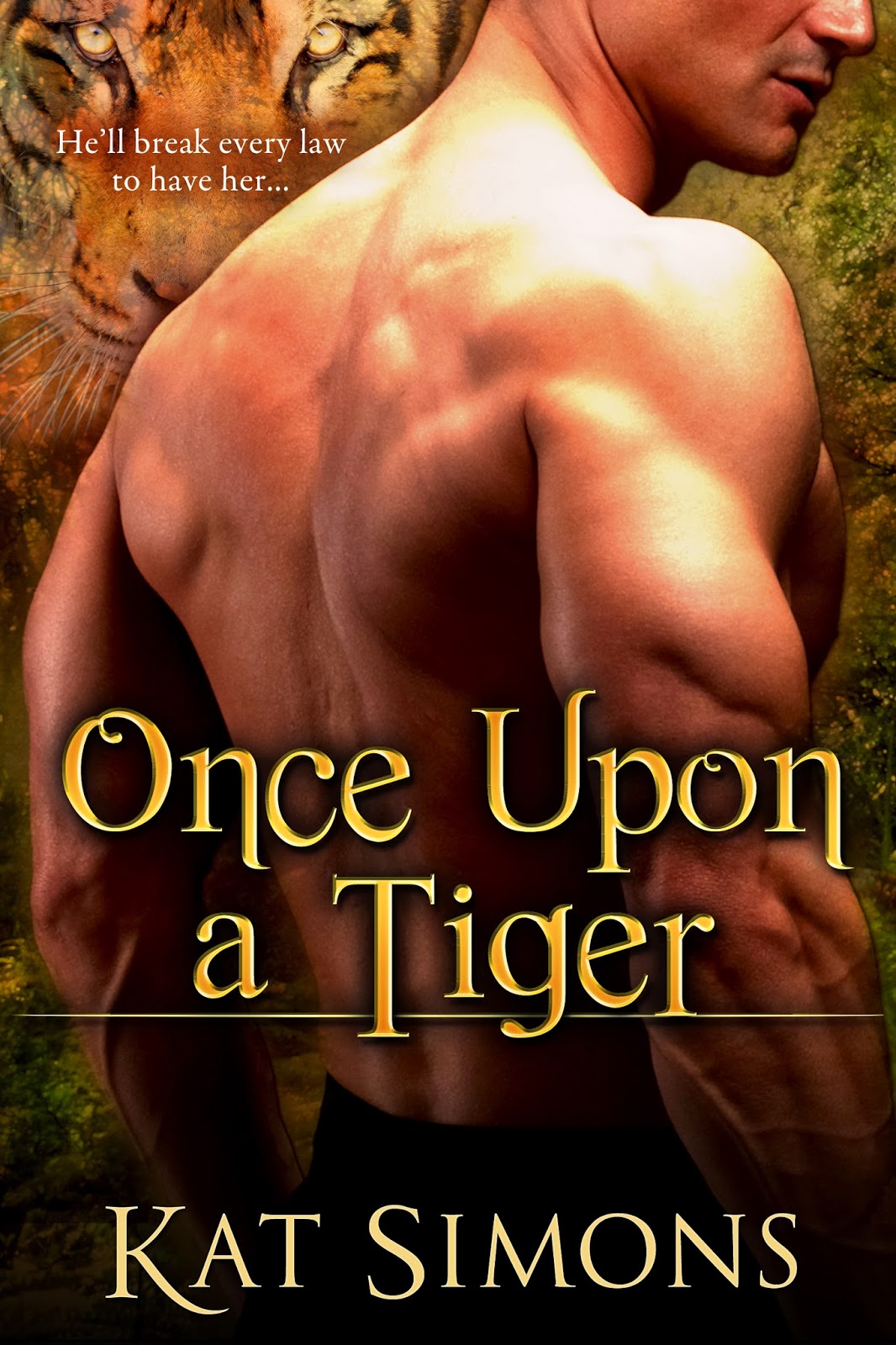 Among the tiger shifters, Alexis Tarasova is regarded as fierce and dangerous, with a reputation that would make even the most daring tiger think twice about challenging her. Female tiger shifters may be rare and the mating run a critical part of their species’s survival, but Alexis is the only female Tracker and will not back down, even at the threat of tiger law. She will not be forced to mate. So when a handful of males band together to force her to participate in the run, Alexis chooses to stand her ground and fight instead.

Outcast from the tiger shifters after a vicious childhood attack left him mute, Victor Romanov has never taken part in the mate run. He’s never particularly cared, though, since the woman he loves refuses to take a mate. However, when he learns Alexis may be in danger, all bets are off. Nothing will keep him from her side.

The chemistry between them burns wickedly hot and forges them into an unbeatable pair. Alexis knows that being with Victor means she will have to break another one of her people’s laws—a move that might push the tigers too far. But, for Victor, she will risk everything, including her life, and do what she thought she’d never do—run.
Excerpt:
To Alexis’ surprise, Victor was standing at her door only a few minutes later. She swallowed and tried not to stare. He was magnificent, muscled and lean, with just the right amount of hair covering his human body. The hard cut angles of his face should have made him look harsh but somehow he just looked more compelling. Black eyes, closely cut dark hair, and a sexy half-smile that made her stomach muscles tighten, all combined to send her heartbeat pounding.
She’d never been around Victor when she was in estrous. In fact, since coming to terms with the knowledge that her obsession with him could never lead to a future, she’d made an effort to never spend time alone with him. He was the head security technician at the elders’ compound, so they crossed paths regularly. But she tried making sure there were others around to keep her from doing something stupid.
Unfortunately, she hadn’t always been successful.
She flashed on a recent memory of literally bumping into him in a corridor at the compound when she’d been too deep in thought to notice her surroundings. He’d held her arms while she caught her balance. The contact sent shivers of desire shooting through her body, forcing her to step back as soon as she could, then apologized.
He pulled a notebook from the back pocket of his dark jeans and wrote, You okay?
“Fine. The job I’m heading out on has me…” She shrugged. “It’s a tough one.”
A friend?
“No. Nothing like that.” She made the mistake of looking up to finish and got momentarily caught in the deep darkness of his steady gaze. Her stomach danced in giddy delight even as her heart tightened. Swallowing, she said, “The tiger I’m going after has something wrong with him. He’s started stalking children.”
Human or tiger?
“Human.”
Dangerous.
“Exactly.” Dangerous to their people if he were discovered by the humans. Also dangerous for her as her target couldn’t possibly be sane if he was hunting kids.
Has he hurt any yet?
“No. Fortunately. He came close twice, though. I have to find him soon.”
Do you want help?
She straightened. No one offered to help her. Not since she’d taken the Tracker oath. But he looked serious. And beneath the façade he normally wore, she sensed a hard core of intensity only a stupid person would challenge. His silence was intimidating enough, but for the first time, she saw a dangerous edge to him.
And he was offering to help her. The gesture touched her in ways she wouldn’t have expected. Suddenly, she was aware of just how alone they were and just how desperately she wanted him.
“I’ll be fine.” Even as she said this, her heartbeat quickened and she had trouble speaking above a whisper.
I know. But if you need me, I’m here.
Her pulse pounded loud in her ears as she read. Could he hear it? Did he realize just how much she needed him—just not for the hunt? She found herself staring at his mouth. The urge to lean in and taste him overwhelmed her.
Alexis blinked back the memory and realized she was once again staring at Victor’s mouth. This time, there was no one around to interrupt them and keep her from giving in to the years of wanting. During that previous meeting, a member of his security tech team had required his attention and he’d hurried away, leaving her breathless. She’d brought in the rogue tiger with a little more aggression than she might have normally. And then she’d taken herself off to her retreat here in the mountains to wallow in the frustration of having to resist the only man she wanted.
Now Victor was here. No one between them. And her hormones were making things infinitely worse.
His being naked did not help her control either—which was hanging on by a very tiny, thin thread.

My Review: 4 stars
I very much enjoyed the world that Kat created. Although I would have preferred the story to go on longer, there was enough for a good, solid story. I liked both Alexis and Victor. I liked that they were different, yet drawn to each other. I loved the fact that Alexis had learned sign language so she could speak to Victor, even though before the Council forced her hand she never had. I also loved that Victor was there for her, standing beside her even though she was unmated and could have done some serious damage to all involved if she had lost her temper instead of kept her cool. This was a great story, Kat did a great job with the characters and the storyline was non-stop, always moving forward. 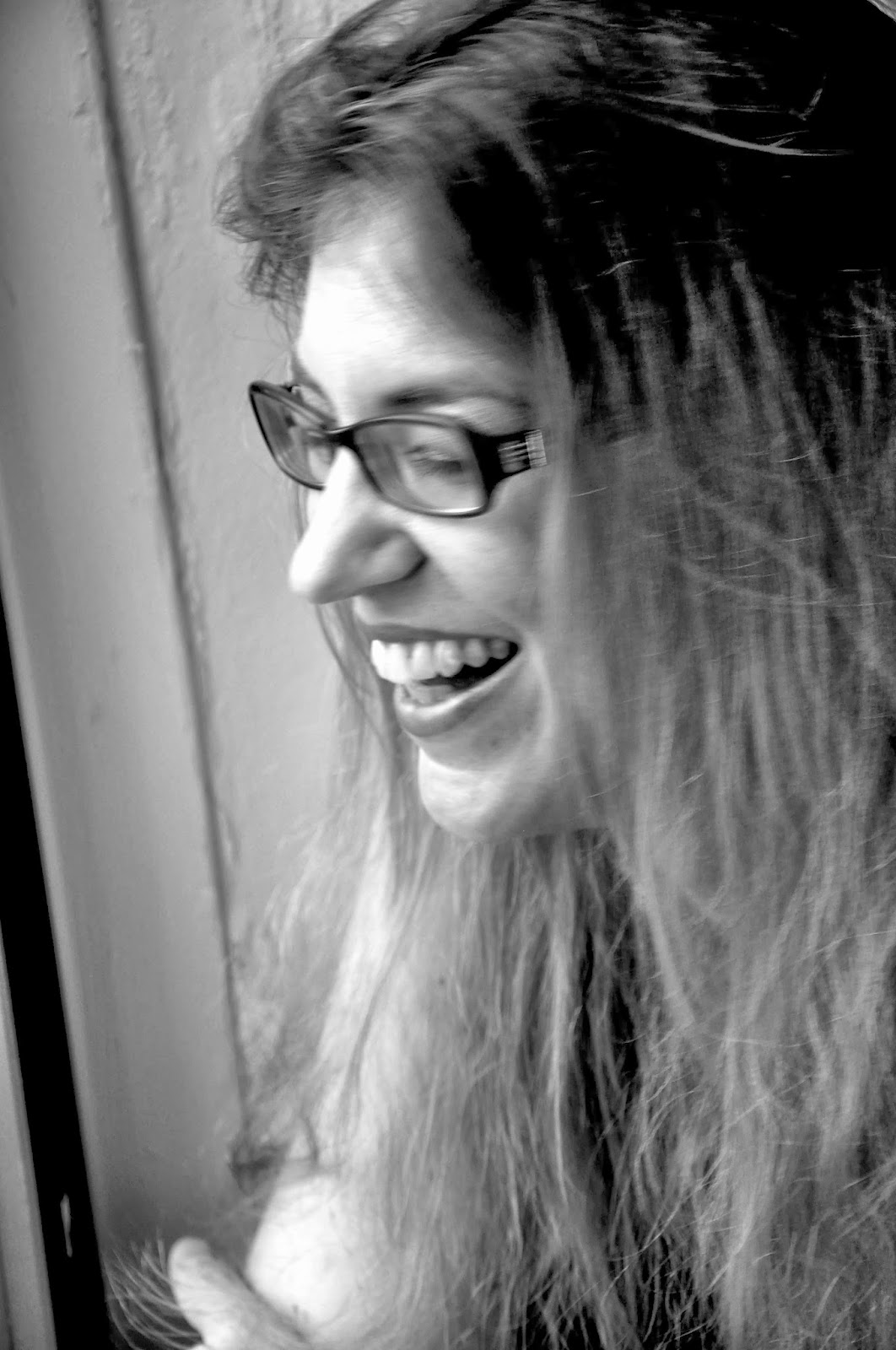 Kat Simons earned her Ph.D in animal behavior, working with animals as diverse as dolphins and deer. She brought her experience and knowledge of biology to her paranormal romance fiction, where she delights in taking nature and turning it on its ear. After traveling the world, she now lives in New York City with her family. Kat is a stay-at-home mom and a full time writer. 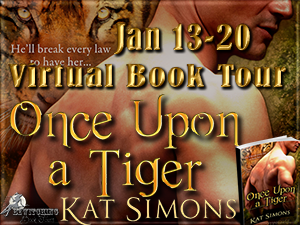