Love Songs For The Road by Farrah Taylor with Excerpt, Giveaway & Review 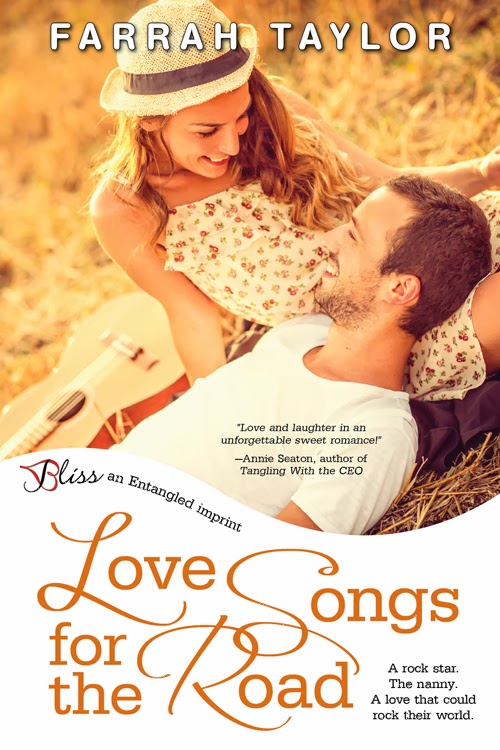 Book Description:
A rock star. The nanny. A love that could rock their world.

The only thing rock star Marcus Troy loves more than making music is his kids. So finding just the right nanny to take on tour with them is important—as is proving to his ex he deserves joint custody. Falling for his employee wouldn’t just be fodder for the paparazzi: it could ruin everything.

Too bad the perfect nanny turns out to be beautiful, vibrant Ryan Evans. Ryan’s never left her small Montana town before, so she jumps at the chance to see the country. And as much as accidental fame doesn’t gel with shy Ryan, what does is her relationship with her capricious, smoking-hot, shockingly good dad of a boss. Marcus is nothing like what she expected. But when the whole world’s watching them, will life in the spotlight be too hot to handle?

Excerpt:
“Whoa,” Ryan said under her breath. She had never seen a male form so beautiful. Marcus’s skin was perfectly bronzed, his chest bare and sculpted. His shoulders were broad as a swimmer’s, and his arms were covered in sexy, intricate tattoos. His brown hair had a slight wave to it.

She couldn’t see his eyes, of course, though she did take note of his high cheekbones and strong jawline. To features like those, she had no objection. But it was his rock-hard
abdomen that made Ryan feel so light-headed she found herself looking for the nearest place to sit. Even as Marcus lay still, his insanely defined abs seemed to shimmer when they caught the sunlight coming through the window.

But as much as she was enjoying the view, Ryan was a little freaked out, too. What was going on here? Had a girlfriend of Marcus’s tied him up and left him here after a kinky sexcapade? Had a groupie stalked him and inflicted some kind of horrible revenge fantasy on him? She covered her eyes with her hand, but then, she peeked through her fingers. It seemed wrong, but she just couldn’t help herself. Slowly, a smile curled across Marcus’s lips, but still he said nothing. He seemed to be waiting for something, moving his neck slightly as if to better listen. Turning his head toward Ryan and Serena, he raised his index finger to his lips. Why was he shushing them?

Suddenly, a closet door across the room swung open, and two children ran out toward Marcus, screaming—a boy of four or five carrying a plastic ax and a girl who looked about
ten wielding an enormous Nerf bat and wearing a football helmet. Their battle cries were so shrill that Serena stuck her fingers in her ears, while the children began beating the hell out of their dad, who tried and failed to defend himself against the punishing blows.

“Do you surrender, prisoner?” the girl demanded. She kept her game face on. She was something fierce.

The boy was giggling, though, as he repeated his sister’s words. “Surrendah! Surrendah!”

“I give up! I’ve had enough,” Marcus cried, his fear and terror sounding real enough. “Just don’t hurt me anymore. I can’t take the pain!”

The children collapsed into giggles and fell upon their father. Of course, it wasn’t every day that Ryan interviewed with a gorgeous, captive man, but she was nearly as surprised by the sexy prisoner’s parenting skills. By all appearances, Marcus was a fantastic dad, easy and affectionate with his kids, not someone who would leave the child-rearing to professionals while he wrote chart-topping singles and bedded breathless groupies.

He took off his blindfold and hopped over to Ryan and Serena, still struggling with the cloth ties that bound his ankles and wrists.

“Hi, are you the nanny?” he said excitedly.

“That’s me,” Ryan said, as calmly as she could manage. “Ryan Evans, at your service.”

My Review: 5 stars
I really just loved this book. I enjoyed the storyline and the characters were interesting and just pulled me into their world so easily. Farrah did a fantastic job writing this book. I loved how playful Marcus was with his kids. I loved that Ryan didn't have a problem walking out in the beginning and showing that she didn't deserve to be treated disrespectfully. She was just what a person like Marcus needed in his life and she showed up just in time, in my opinion. There's a lot that goes on, and one thing leads to another. Then it all blows up, harsh words get said and everyone involved is left hurting. Then it's time to decide if the problems that would come from a relationship outweigh the possibilities of what could very well be the best thing that Ryan and Marcus could find together.

About the Author:
A reading specialist with a masters degree in Early Childhood Education, Farrah Taylor has taught first grade in Northwest Montana for over a decade. She is thrilled to be publishing her first novel, Love Songs for the Road. Farrah, a lifelong music lover who has spent far too much of her savings on concert tickets, is glad to finally be seeing a return on the investment. She lives with her husband, Ty, and son, Latham, in Polson, Montana. 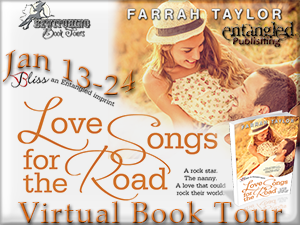