Until Trevor (Until #2) by Aurora Rose Reynolds with Giveaway, Excerpt & Review 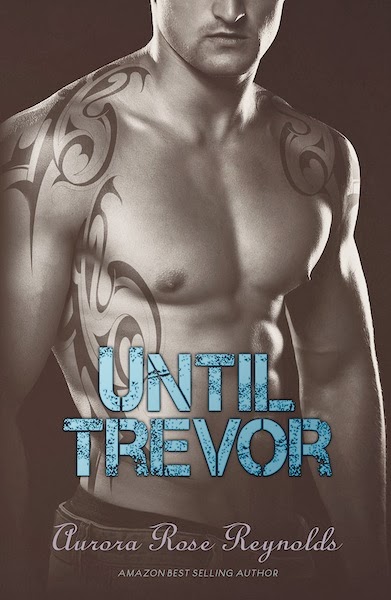 Trevor Mayson had his life planned out - make the family business successful and play the field for a few more years before eventually settling down. Then he sees her. Liz Hayes was beautiful, shy and everything that he could ever want...but she didn't fit into his plans. After Trevor painfully rejects her, Liz finally starts to move on, but Trevor is finding it difficult to truly let her go. It seems the more he tries to stay away, the more intense his feelings for her become. Like a stretched rubber band, he can only take so much before snapping.

Liz Hayes is done waiting for Trevor and isn't interested in getting her heart broken by him again, but Trevor is making it difficult for her to forget him when he shoves his way back into her life.

Can Trevor prove to her that he is worth falling in love with again, and is he ready to change his life plan to let her into his heart?

“Fuck you,” I say while smiling.

Cash shakes his head, laughing. “I'm going to stay away from chicks from now on. There must be something in the water.”

“So you aint gonna call Lilly?”

“Fuck yeah, I'm calling her! Did you see her tits?” I look over at him; he’s holding out his hands in front of him like he’s got huge melons balancing in them.

“You’re full of shit,” I laugh. Out of all of us, Cash is the one who wears his heart on his sleeve.

“Never mind don’t look at her tits.” He says. I look over to see a look of confusion on his face before he ask “So are you and Liz living together?”

“So you’re living together but she doesn’t know it?”

He laughs. “Let me know how that works out for you.”

I have really enjoyed reading this book. There were so many times that I just laughed out loud, it was great! I wondered what was going on with Trevor and Liz in the first book, Until November, and now I've got the whole story. I love it! I loved that Liz was able to come out of her shell after she became friends with November, and that Trevor didn't let her get away. Dumbass move on his part for letting her go in the first place though. But I've got to give to to these Mayson men, once they make up their mind, that's it. Trevor knows that Liz is his one and only, way before she knows. I loved the way he was honest with her, pushed her to be with him, even when she thought he was just looking to get laid. Then he made her wait, that was hilarious. One of my favorite parts was when Trevor and Liz came home to find Jen in their house. I LOVED how Liz handled that!! I very much enjoyed how Trevor would take control of any given situation and Liz loved that more than anything, but didn't let on to that with Trevor. Liz loved her bossy, controlling man, that made me smile a lot. Another thing that I really enjoy about Aurora's books is the fact that it doesn't just end once the main couple reaches an acceptable point, like proposing or getting married. Nope, she lets you see everything, and I really love that. I really enjoyed seeing more of November and Asher also. I know it's all about family, and those big, sexy Mayson men. I enjoyed seeing the beginning of Cash and Lilly's relationship, and hated the way that it ended. It's disturbing that women can be like that. I am so looking forward to reading Until Lilly after reading the sneak peek at the end of this book. It's torture to only know so much, and have to wait for the rest. I will read it. Aurora has made some very memorable characters and the storylines that she comes up with are fantastic. She's an amazing author that will be on my permanent to-read list.

Aurora Rose Reynolds is a navy brat whose husband served in the United States Navy. She has lived all over the country but now resides in New York City with her Husband and pet fish. She's married to an alpha male that loves her as much as the men in her books love their women. He gives her over the top inspiration everyday. In her free time she reads, writes and enjoys going to the movies with her husband and cookie. She also enjoys taking mini weekend vacations to nowhere, or spends time at home with friends and family. Last but not least she appreciates everyday and admires its beauty.

Connect with the Author

Other Books by Aurora

November is looking forward to getting to know her father and the safety of a small town. After leaving the Big Apple and her bad memories for Tennessee, November starts working for her dad at his strip club doing the books. The one time she’s allowed there during club hours she runs into Asher Mayson. He’s perfect until he opens his mouth and makes assumptions. November wants nothing to do with Asher but too bad for November, fate has other plans.

Asher Mayson has never had a problem getting a woman, that is until November. Now all he can think about is making November his and keeping her safe.