Chance of Rain by Amber Lin with Giveaway & Review 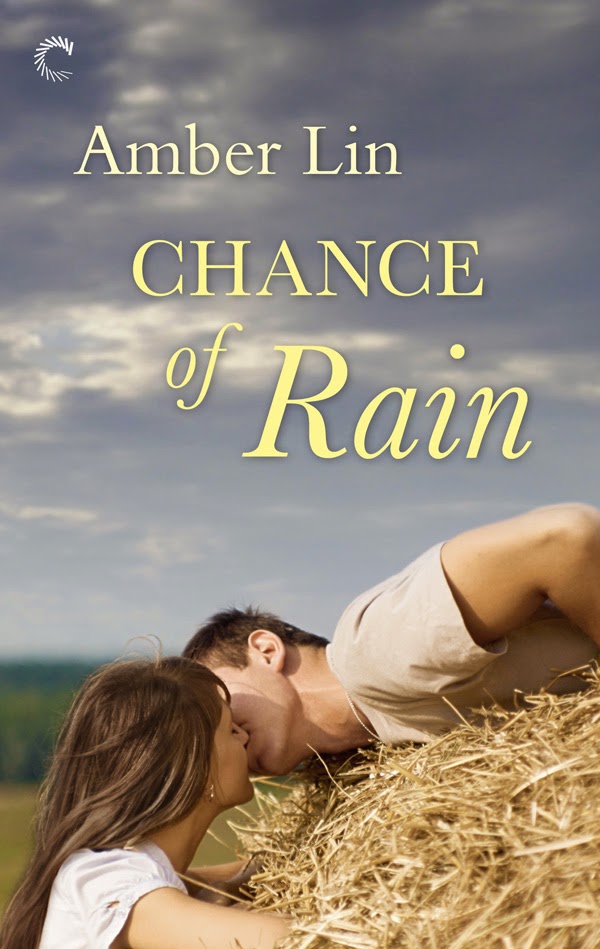 BLURB:
The only things Natalie Bouchard wants to change are the weekly specials in her Gram’s diner. So when her high school sweetheart strolls back into Dearling, Texas, she allows herself to indulge in a little flirtation, but that’s as far as it goes.
Navy SEAL Sawyer Nolan has returned to sell his father’s land and get the hell out, no matter how enticing he still finds Natalie. Until a storm rolls over the Texas hills, stranding them together at the farm…and the memories of their steamy past  lead to a reunion filled with hot days and long nights.
Soon Natalie’s so far under Sawyer’s skin he can’t imagine being without her. But he has a lot of history in Dearling he’d like to leave behind, and Natalie is practically married to this town.  If Sawyer wants to be more than just another person who leaves Natalie, he’ll have to give his hometown—and himself—one more chance.

“You planning on staying in town long?”
Sawyer paused, as though deciding how much to share. She could have sworn regret flashed briefly in his eyes before he said, “Can’t say that I am.”
And that was that. He had left all those years ago. He would leave again.
She couldn’t possibly be disappointed.
Sawyer turned to her. “I know it’s early, but do you happen to have any of your famous cherry pie? Even after all these years, I still get the craving for it now and then.”
The flattery softened her. Cherry pie was her specialty, not Gram’s. He’d thought of it years later? It was seductive. He was seductive…but also dangerous. She stood on the precipice, ready to fall for him all over again.
“Sorry,” she said. “Fresh out.”
He gave her a rueful look. “Guess I’ll have to come by another time.”
From the corner of her eye, she saw Lucy’s eyebrows rise. Her friend knew she always kept a spare pie in the freezer for just this sort of request. But with Sawyer, pie seemed like a slippery, fruit-filled slope.
He took a swig of coffee and set it on the counter. The mug cracked down the side, separating from the handle. She stared at the broken pieces of ceramic, suddenly unable to defend the quality or quaintness of her diner. Unable to defend her own decisions, her dubious leadership. It wasn’t old-fashioned at all. It was cheap, backward, exactly what he must think of this town.
Exactly what he must think of her.
“Shit.” He grabbed the dish towel from her hand and wiped it up. “Sorry about that.”
She wanted to let him, but there was a jerkiness to his movements, an almost frantic edge that hinted at something darker beneath the surface. She caught his hands, and they stilled beneath hers. His gaze lifted to hers.
“It was really good to talk to you, Sawyer. Even if you leave town soon, I’m glad you came by.”
He swallowed. “I’d like to see you again.”
Her heartbeat quickened, and lower, a different kind of pulse strummed through her body. It doesn’t mean anything, she told herself sternly.
She forced a smile. “You know where to find me.”
Because she never ever left.

My Review: 4 1/2 Stars
I knew this would be a good book from the first few pages. There was just something about this book that made me feel comfortable. Like slipping on your favorite old jeans. This was s story that you just slipped into and felt a part of. The characters were fantastic. The storyline was old heartbreak and new risk, but always something there between Natalie and Sawyer. I really enjoyed the southern feel of the book. Neighbors looking out for neighbors, that kind of thing. Natalie and Sawyer had chemistry in spades. There were some oh my damn, hot, sweaty, sheet clenching scenes that were just amazing. I loved the way they found their way through their own problems to get to each other, not just physically, but through their hearts and minds. I loved how the book ended, that was just so amazing and compassionate. Amber has done a fine job with this book, and I'm going to be keeping an eye out for her work. It's really good.

BIO:
Amber Lin writes edgy romance with damaged hearts, redemptive love, and a steamy ever after. RT Book Reviews called her debut novel, Giving It Up, “truly extraordinary.” Amber married her high school sweetheart, gave birth to a kid who’s smarter than she is, and spends her nights writing down her dirty thoughts. In other words, life is good.