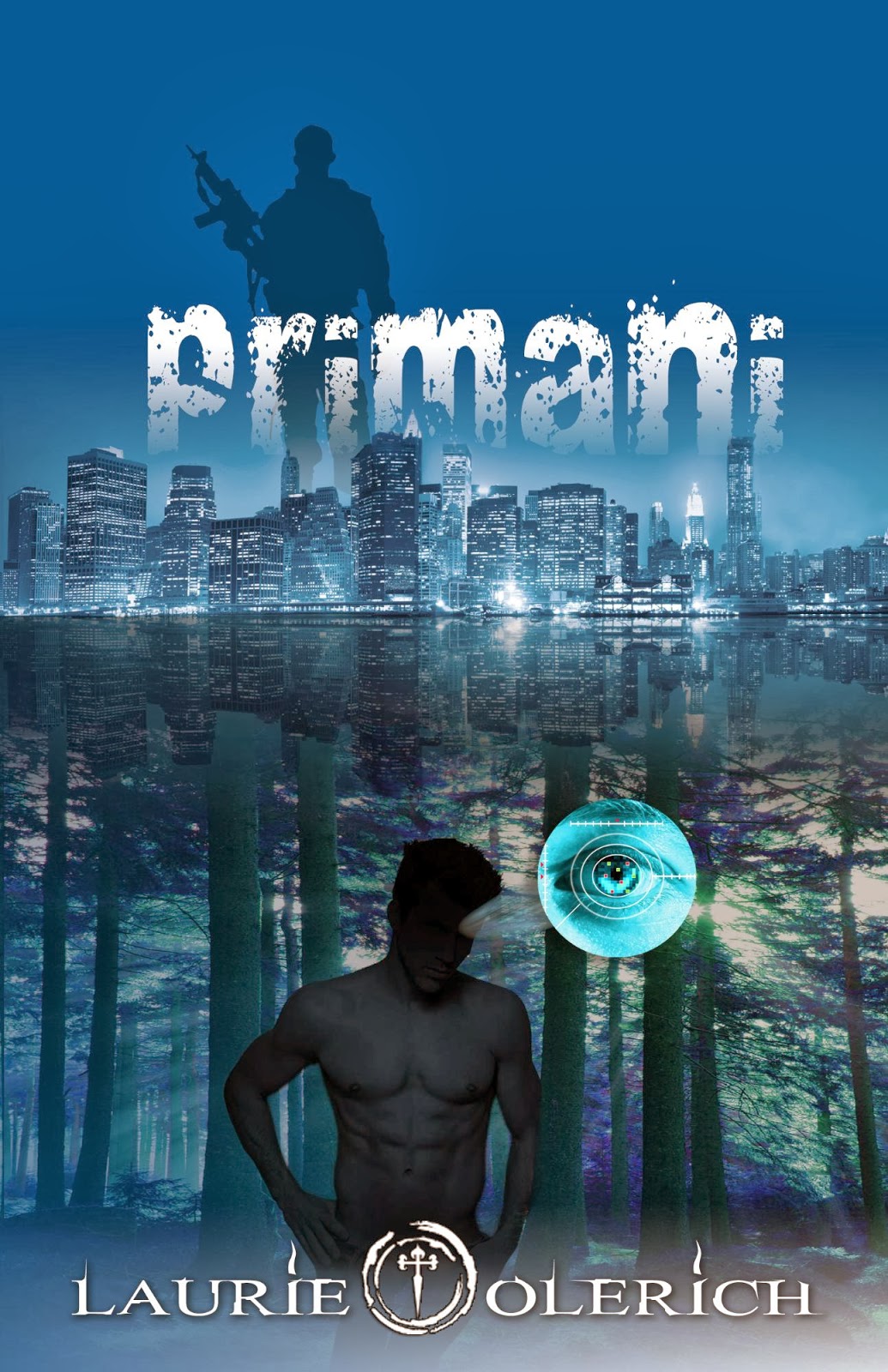 Mica Thomas is Sean O'Cahan's worst nightmare. Part angel, all Primani, he's a ruthless protector with unusual talents. Jaded by the weakness of humans, he takes a hands-off approach to his charges. His job's to protect her. That's all. But Mica's got other ideas. He's strong, but she's stronger. Will his one moment of weakness destroy them both?

Mica doesn’t believe in quaint notions of fate and destiny. She’s a live-in-the-moment kind of girl until she’s attacked and left for dead. When Sean and his friends appear out of thin air to rescue her, Mica knows there’s more to them than they’re saying. Secrets and lies pile up but she can’t walk away from him.

As the clock ticks, Mica is drawn deeper into the Primani world until there’s no way out.

Tick-tock. Time is running out. What happens when it does?

It was about time to go out. Ricki and Dani were coming over to get me in a little while. I was finishing my hair and looking at my face critically. Was my nose crooked? I peered closer at my reflection. Mm, maybe it was okay. All traces of bruises were gone. The heart shape of my face was back and my lips were full from good genes instead of blood clots. I looked at my eyes for changes. Wide and tilted up at the outside, they shone dark blue in the mirror. They still had a shuttered look to them. I wasn’t quite healed. I forced a happy smile that would reach my eyes. Ugh! That’s worse. I look like a crazy person. Better to keep the smile small. I would just hope no one paid much attention to my eyes.

A movement caught my eye in the mirror. I spun around but the room was empty. Carefully, I snatched up my hairspray and crept around the corner. If someone was in here, they would get a rude surprise. I was armed this time! But I didn’t hear anything and I didn’t really sense anyone else. I must have imagined the dark-haired boy in the hall. At least it didn’t look like Scott Flynn. Maybe I needed a dog.

The party was huge. We were out in the country at Dani’s friend Angel’s house. Her parents had gone skiing and left the house to her. We were glad to keep her company…all 100 of her best friends. I hadn’t been to a party since my going away party last summer. After my mom’s funeral, I stayed with my sister until I finished school. It was horrible but my friends helped a lot. They kept me busy on the weekends and then threw a huge drunken bash for me before I left in June. It was the party to end all parties. I came very close to losing my virginity that night but was saved the trouble by the police after the neighbors complained. Marc was devastated.

It had been a long time since I had been to a party. I was ready to have some fun tonight. I kept trying to push that half-seen face from my hallway out of my head, but he kept intruding anyway. I was making my way from the pool house back inside when I saw him again.

I stopped in my tracks and stared. Whoa!

Who are these guys?
I’ve never seen them before. There were two ridiculously gorgeous guys standing in the shadows near a covered walkway. They were talking intently to each other and seemed to be scanning the crowd for someone. There’s no way they were partying. No possible way--they were way too intense. They reminded me of Secret Service agents, but without the suits. Instinctively, I crouched behind a snow-covered shrub and watched them. The taller one seemed to be chewing out the shorter one. The shorter one was listening and nodding his head. He looked unhappy. I couldn’t help but stare. It was him!

He had short hair and a hard face. It was too strong…too mature for a teenager. I could see his cheekbones from here. I couldn’t make out his eyes though. He looked as if he was about to kick someone’s ass or take over a small country. He stood tensely, listening to the other one. His shoulders were squared back and tugged against the t-shirt he was wearing. Taking advantage of my invisibility, I let my eyes wander over the rest of his body. Glancing down at his arms, I did a little swoon and kept going. Sadly, his good parts were hidden in the shadows. Oh, yum!
He was hot. But what was he doing here? Was he really in my house earlier? That’s impossible.

“Find her!” The wind shifted and the harsh words drifted clearly. The taller one gestured towards the house. He had the same military look to him, but he was bigger and much more intimidating. He was more bulky in the shoulders but had a lean torso and a nice butt. I imagined he had amazing abs. Yes, he was gorgeous but looked mean. There was something about the set of his jaw that said he’d take no crap from anyone. What were they doing here? A small shiver went down my back and I started to look for an exit.

“Mica! There you are! We’ve been looking for you. Come back inside. Someone found a karaoke machine.” Tyler’s voice interrupted my spying. Smiling impatiently, he reached out to grab my arm and I flinched. He held out a hand and said, “Hey, my bad. I’m sorry, dude!”

The strangers zeroed in on me like I was standing in a spotlight. Both sets of eyes pinned me to the ground and I froze like a baby deer. While Tyler babbled about karaoke, I watched them watch me. Both stared so intently that I was afraid I would burst into flames. They seemed to know me. How was that possible? Who were these guys? The big one said something to the shorter one and they started moving my direction. The big one moved like he was stalking prey. I yelped and bolted back to the house. I was striving for a dignified retreat but knocking people out of the way kind of ruined it.
“What’s with you? You look like you’ve seen a ghost.” Tyler skidded to a halt beside me.

I laughed shakily. “Did you see those guys?”

“The two guys who were standing across from us outside! You didn’t see them? They were coming over to us.”

Tyler looked down his long nose and said, “Dude, I didn’t see anyone but you standing behind a bush. I think you need another beer.” He put a new beer in my hand and clinked his bottle against mine in a toast.

I stayed inside the rest of the night and kept close to my friends. I kept a lookout for the ‘secret agents’ as I nicknamed them. I didn’t see them again. Maybe I had imagined the whole thing? It seemed so real though. It was really late when it was time to go home. Ricki was pretty wasted so I was driving. I wasn’t exactly sober and my dad would kill me if he knew I was driving. But hey, I had a new philosophy: I would die when it was my turn. In the meantime, I would live life how I wanted and we’d just see how things turned out. Aric and Dani walked us to the car and helped Ricki into the backseat. Aric made sure she had a seatbelt on and asked me how I was doing.

He looked dubious and told me to drive slowly because the roads were slippery. I only had to drive about 30 miles to get us home. Ricki fell asleep before we turned onto the main highway and it was unnaturally quiet. I turned on the stereo and sung disjointedly to a Lady GaGa song that I barely knew. Tapping my fingers on the steering wheel, I yawned. The miles mocked me as we crept along in the snow. I wasn’t even sure we were really moving…My feet were freezing so I turned the heater on. Before long, the car was toasty warm and so were my eyes. Blinking to stay awake, I shifted forward to lean on the steering wheel and focus better on the road. Not one of my better ideas. The woods were dark around us and the falling snow obscured everything. It was like driving in a black and white tunnel. My eyes closed and I blinked hard again. The snow was so pretty bouncing off my window. It was mesmerizing…I was drifting off to sleep when the car started to slide and abruptly stopped. The bump jolted me awake and I looked around in astonishment. I wasn’t alone. I wasn’t even driving. I was in the passenger seat.
“What the hell? How did you get here?”

The Secret Agent Man from the party looked at me with snapping eyes. “Are you crazy? You almost died back there! Do you know how close you came to wrapping this car around a tree?” His hands flew as he yelled and I cringed away from him. Taking a deep breath, he held up his hands in a gesture of peace. “Calm down; I’m not going to hurt you,” he hissed impatiently and wrapped his big hand around mine before I could protest. Laurie Olerich is the author of the new Primani series. Part urban fantasy, part romance, part paranormal...Three things she can’t live without! Laurie spent most of her life in the Northeastern United States and in Western Europe. She now lives in San Antonio, Texas, with her son and Dalmatian duo, Domino and Rambo.  Desperate to escape the heat, she lives vicariously through Mica and her Primani by setting their adventures in the mountain coolness of New England and the rainy days of London. Before throwing caution to the wind and diving into a writing career, Laurie dedicated 20 years to her country by serving in the United States Air Force. Much of her time was spent around men with guns and cool toys...this explains her obsession with both.