Rock'n Tapestries by Shari Copell with Giveaway, Excerpt & Review with Preview of Book 2 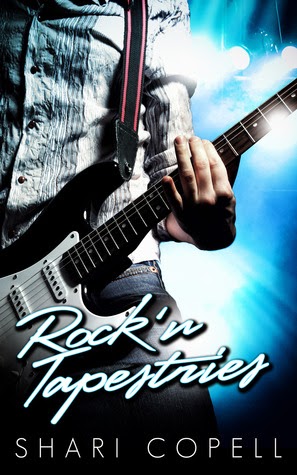 Synopsis:
WARNING: It goes without saying that this book has sexual content and adult language. However, if you like your books to have a neat and tidy happy ending, you probably won't enjoy this one. Life is messy sometimes. This story reflects that.
“Asher Pratt had been a drug for me, and I wasn’t sure I wasn’t still addicted.”
Chelsea Whitaker works as a waitress at Tapestries, a trendy Pittsburgh bar. She’s doing her best to avoid Asher Pratt, the Pittsburgh rock legend who shattered her heart years ago.
When he takes a job at Tapestries just to be near her, Chelsea has some decisions to make.
She soon discovers that some things never change. It’s all she can do to keep a tight hold on her heart as Asher takes her for another wild ride.
As she struggles to gain some perspective on their relationship, she learns that he’s never needed her more. She must put the past aside for the sake of the future.

Excerpt:
The Dirty Turtles played a Saturday night gig at Tapestries three weeks after Christmas. I felt a sort of dull excitement, a tickle in the pit of my stomach.  Now that Asher and I were speaking, I could actually enjoy them.
I was washing up a few stray dishes in the back room of Tapestries that afternoon when Asher came hurrying in, a large box in his arms and an equally large smile on his face.
“I want you to be the first to have one of these, Chels.  Mr. Dreyfus said all of the servers could wear these tonight.”
He dropped the box on the floor and bent over to open it.  I grabbed a towel to dry my hands and turned my attention to him.
“What have you got?”
He plunged both hands into the box, fished around for a bit, then straightened.  In his hands, he held a light blue T-shirt. On the front over the left breast, screen-printed in black, was a small flaming electric guitar. He spun the shirt around. On the back, it said The Dirty Turtles are Rock’n Tapestries!
“This is a medium.  Will it fit you?” he asked.
“Yes!” I mock squealed like a groupie and pulled a Sharpie out of my apron pocket.  “Will you autograph it for me?”
“Of course!”  He took the Sharpie and signed on the front, right under the flaming guitar.
When he handed it to me, I clutched it to my chest, rolled my eyes toward heaven, and sighed. “Asher Pratt just signed my shirt.  I can die happy now! “
Asher laughed. “We’re going to throw some of these out into the audience tonight, but I want the staff to have first pick.  Do you think Marybeth would wear one?”
“I think she’d break your arm if you didn’t ask. She may not wear it tonight, but I know she’ll want one.”

My Review: 5 stars
I sincerely don't know how you could not read that book and not be on the floor crying like a baby by the end. I've never read anything by Shari previously, but if it's anything like Rock'n Tapestrics, I'd really like to do so. Shari's writing was brilliant, if a bit twisted at times. I really enjoyed the friendship that came from Asher reentering Chelsea's life. He was good to her and tried to respect the boundaries that Chelsea set for their relationship. He was the man of the hour, but it broke my heart to find out why he pushed Chelsea away. And I'm not lying, just thinking about that makes my heart hurt. Did he think he would spare her feelings? I'm glad that after Asher left Tapestries for the last time, that Chelsea was able to move on with her life with someone new, who wanted her everything. I've got to say that by the end of the book I was reading through tear stained eyes, because it was so bloody emotional. Not only that, but the could haves, should have started coming up, and you could drive yourself insane with those. I'm so sad about the ending, but so happy about the new beginning that Chelsea found with Tage. That man loves her like she deserves. Shari's writing was just fantastic and made you feel so many things, her characters seemed to take on lives of their own. I can't wait to read the second book in the series! This one just connected with me on such an emotional level, I can't wait to see what happends with Wild Angel, Book Two in the series. 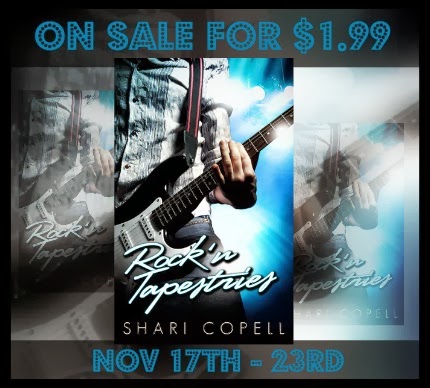 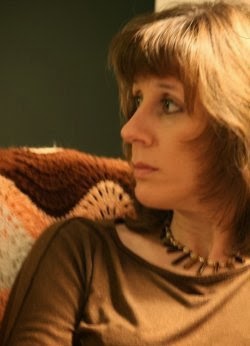 Though I write contemporary romance under the name Shari Copell, my real name is Sherry Jesberger.  I write a historical fantasy/paranormal romance series under the name S.L. Jesberger.
I am an eleventh generation native of Pennsylvania.  My husband Gordon and I raised three lovely daughters, one of whom designs my book covers. Another daughter drew the map in the front cover of my historical fantasy series.
I’ve always had stories swirling through my head. Crazy stuff, totally whack situations. I was a voracious reader as a child, choosing to escape into the world of books. I wrote stories when I was a teen, but quit as I grew up. (Keep in mind, there were no computers then. Writing a book or story consisted of a brand-new notebook and a ballpoint pen.) I found some of these early stories as I cleaned out my grandmother’s house after she passed. Unfortunately, I threw them away.
I started writing again in 2012 after my husband lost his job. Aislin of Arianrhod was published in October of that year. I immediately began to work on the second book in the series, Winter’s Child.
Sometime in the middle of writing Winter’s Child, I had the inexplicable urge to swear like sailor, use modern vernacular, and write steamy sex scenes. I was amused and tried to push it aside. The language in a historical fantasy is obviously much different from a contemporary romance, so I had to behave myself.
I finally just thought, fuck it. I’ll do it.  It was during that time that I started to write “Micah’s Island.” I simply needed to purge the wild story that had taken over my brain by then. It was so much fun to write.  What would happen if you met a man who had never seen a grown woman before?
I chose the pen name Shari Copell because Micah’s Island was so very different from the Àlainnshire series. Copella was my grandmother’s maiden name—I just dropped the A.
For the most part, people seemed to like Micah, though he was a man of few words.  I got some nice (and not so nice) emails about it, mostly from people wanting a better ending. I promptly wrote them one.
I wasn’t sure I would ever write another contemporary romance until Rock’n Tapestries dropped into my head, nearly complete from beginning to end (though I did run some things past Tara Chevrestt, who edits for me. Her suggestions were invaluable.)  You just have to indulge your muse when that happens, as it doesn’t happen often.
Though the names and situations have been changed to protect the not-so-innocent, some of the things in Rock’n Tapestries were things that actually happened to me.  My husband was wearing a bass guitar the first time I ever laid eyes on him. As Chelsea says of Tage, “ I think I might’ve had to scoop my jaw off the floor.”  He’s the skinny dude in the gray tank top and orange guitar on the far right in this video: http://www.youtube.com/watch?v=1lXGyaHNWRI
I hope you’ve enjoyed Rock’n Tapestries. I’m currently having a blast working on a book about Nicks Sorenson, Asher’s daughter. I love this girl! It should be out sometime in 2014.
In the meantime, rock on! 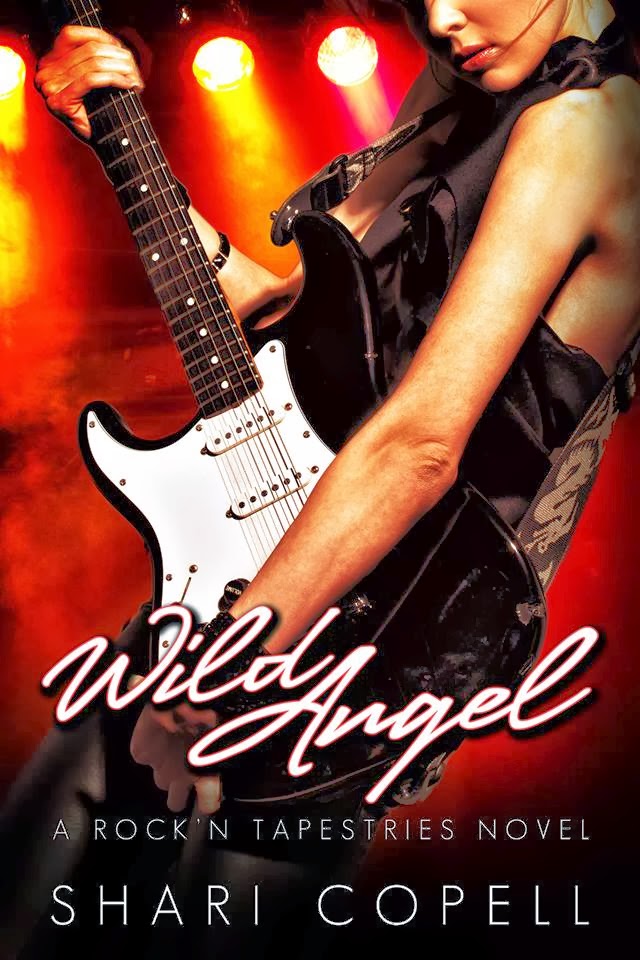 Book Blurb:
A young guitar prodigy trying to discover who she really is. A husband fighting to hold his family together.  A wife struggling with the feelings she has for a musician who’s been dead for nearly nineteen years.
And a man who will battle from beyond the grave to protect his only child.
Nicks Sorenson, guitarist extraordinaire for the band Wild Angel, has a lot going on during her last year of high school. In fact, she sometimes wonders if someone has painted a bull’s eye on her forehead.
Stone Jensen, lead guitarist for the band Heavy Remedy, shows up everywhere  she plays despite the bad blood between them.  The high school principal is targeting her with endless detentions for some reason. And she’s starting to think maybe her mother is losing her mind.
A dream seems to set inexplicable events in motion.  Things get even weirder when she learns the name of the man who willed her the four guitars she now owns.
Nicks Sorenson is about to find out what you don’t know can hurt you.
Posted by Unknown at 1:00 AM