In a Wolf's Eyes by A. Katie Rose Spotlight with Giveaway 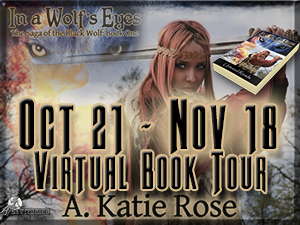 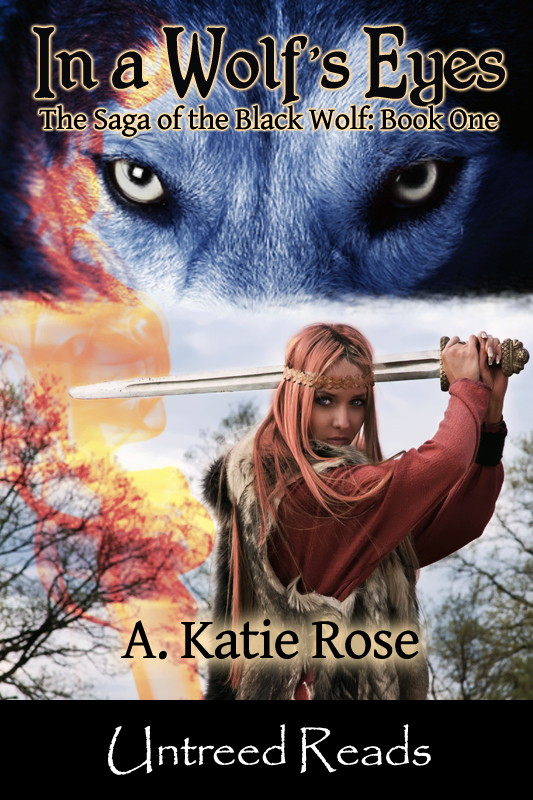 Raine is a slave, a gladiator. Known as the Bloody Wolf, he is the champion of all champions in the Empire of Khalid. Ly’Tana is a warrior princess of Kel’Halla and is set to wed the heir to Khalid’s throne, Crown Prince Broughton. When Raine and his new wizard pal, Rygel, accidentally murder the High King, they set in motion events rapidly spiraling out of control. Ly’Tana discovers the true, and violent, nature of her betrothed, a man nicknamed Prince Brutal for his vicious nature, and escapes her marriage.

But Brutal will stop at nothing to have her for his wife. To entice his runaway bride into a trap, he brings down and captures her griffin bodyguard, Bar. Ly’Tana vows to have Bar back or die trying. She seeks the help of Raine and Rygel, and frees Bar from Brutal’s clutches. Yet, in doing so, Raine and Ly’Tana are forced to flee for their lives, hunted by Brutal’s secretive assassins.

Can they escape the hunters and their silent, evil hounds? Can Ly’Tana evade Brutal’s hungry need to marry her and seize her beloved country? Can Raine keep Ly’Tana alive and still save himself from capture and torture? Can they stop themselves from falling in love?

Thus begins the first novel of The Saga of the Black Wolf series.


Excerpt:
Without warning, a nobleman pushed rudely past me, striking me hard with his shoulder. From the tail of my eye, I saw grey silk trimmed in silver. I might have kept my balance and my royal dignity had I been wearing anything but the simple dress. In the wild attempt to keep to my feet, I stepped on the hem of my gown. If I fell, sprawling in a most undignified fashion, I would be humiliated before the entire court.

If I kept my feet, and remained stoically upright, it meant tearing the flimsy dress from my shoulders, leaving me utterly naked, and shamed in the eyes of the High King and Queen. It appeared Lord Colvin would have his petty revenge, by one method or another.

Starting to fall, I felt my arm gripped tight above the elbow, blissfully saving me from the disparaging choice of either a disgraceful headlong tumble or total nudity.

The hand, strong but gentle, steadied me until I gained my feet and my wits about me. I turned to thank my benefactor, words already in my throat – until I looked up into the most incredible eyes I have ever seen.
My words died stillborn. Like the sun on ice, the eyes were a pale, an almost translucent grey. Long lashes any woman would murder to obtain framed those light irises ringed eerily in black. His black pupils looked as though they peered through a hangman’s noose.

Once, long ago, I saw a shark pulled out of the surf by a fisherman, its eyes black, wide and staring, lifeless and yet alive, predatory and chilling. Like that shark, these eyes lacked anything that resembled human consciousness or emotion. I, a warrior from birth, have stared into death’s eyes without flinching, have killed men who would have killed me, led men into battle with a warcry on my lips. Never before have I seen eyes as cold-blooded as these eyes. I caught my breath against the icy ruthlessness in them. Killer’s eyes, flat and inhuman. Mesmerized, I looked long into those merciless eyes, feeling the chill of fear creep down my spine.

Suddenly the iciness in them vanished. Warmth and humor appeared as if by sorcery. None of his facial muscles flexed, his lips failed to smile, his cheeks remained rock hard and smooth. Yet, curiously, kindness and sympathy gleamed from those sinister eyes as though he had smiled broadly. Then he winked. The lightning fast wink of a man who looked at a woman and liked what he saw.

I gaped. He had winked. He dared to wink at Her Royal Exalted Highness, Princess Ly’Tana, only child of King Gareth, and heir to the throne of mighty Kel’Halla. He winked at me as though I were any tavern slut.
I drew myself up to vent my feminine fury into his smiling eyes -
“Move on, Wolf,” said someone behind him.

The chill returned to his eyes like a veil hiding the sun and he turned away. Only then did I see the leather collar studded with jewels around his neck. 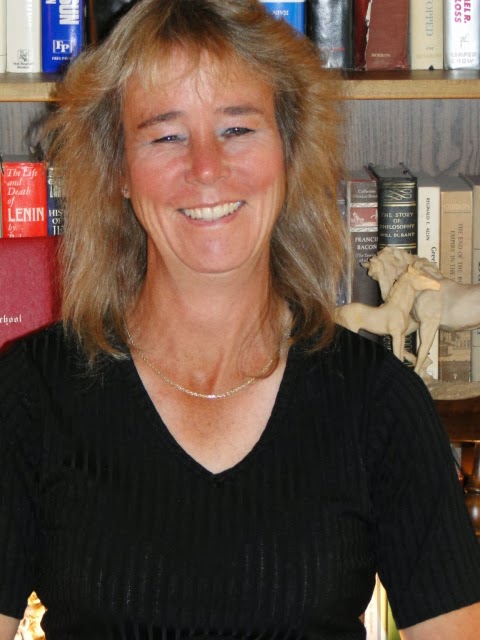 A. Katie Rose is a Colorado native, and earned her Bachelor of Arts degree in History from Western State College in Gunnison, Colorado. She enjoys riding, teaching and learning from horses, likes camping, reading novels, watching movies and, of course, lives to write fantasy books. She currently works as a photographer in San Antonio, Texas, and is a slave to her six cats and four horses.  “In a Wolf’s Eyes” is her first novel.