Four Weddings and a Werewolf by Kristin Miller with Giveaway & Review 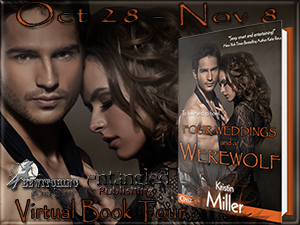 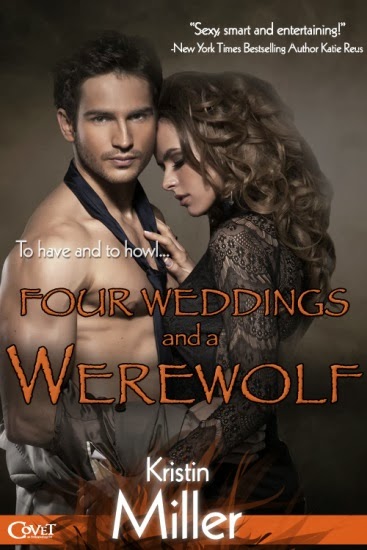 To have and to howl…

Logan Black, former Marine and bodyguard for the Seattle Wolf Pack, hates weddings and has no plan to walk the path to matrimonial misery. But when he’s hired to protect a hot-to-trot wedding planner with a werewolf stalker, he’s forced to put his feelings aside. Not such an easy task when the damsel can turn him on with a single smoldering glance.

Wedding planner Veronica Vale knows werewolves exist, but hates them. One bit her sister, changing their lives forever. When a sexy Marine shows his gorgeous face at one of her wedding appointments, Veronica finds it hard to focus on the task at hand.

The chemistry drawing Logan and Veronica together seems fated, but with Logan’s playboy attitude, Veronica’s hatred for werewolves, and a stalker lurking in the shadows, these two need more than passion to keep them together.


Excerpt:
“Wait…wait.” Veronica slung her purse in front of her and fumbled for her keys. Logan set her down and stole behind her, his arms coiled around her waist, his face buried in her neck. He dusted kisses over her shoulder, letting his lips glide over the silkiness of her skin. She moaned, rested her head on him. And dropped her keys. “Damn it.”
Palming her stomach, Logan held Veronica firmly against him. He was so hard. So achingly hard. “Hurry,” was all he could muster.
“I can’t”—her breath hitched—“when you’re doing that.”
“What? This?” He gripped her waist and suckled her earlobe between his lips. “Is this distracting you?”
“Uh-huh.” She swayed against him and rose up on tiptoe so that her backside was brushing against his erection. “Have to get inside…neighbors watching…don’t want…”
“Shh…” Logan nipped at her lobe and gave a low groan into her ear. “Why don’t you bend over and grab those keys?”
She shuddered, her skin dimpling with gooseflesh. “But I don’t want to move.”
“If you don’t find the strength, your neighbors are going to get one hell of a show.” While holding her against him with one hand wrapped around her waist, Logan used the other to skim down her body. Down the flat span of her stomach. Down her thigh. He lifted her dress and touched skin.
“Okay. Wait.” She jolted into action, bent over—all too quickly—and jammed the keys into the lock. She spun around, playing the temptress by biting her lip in the coyest way, and leaned back against the door. “Come on in.”
She invited him closer. Beckoned him in with a seductive glare that burned right through his clothes.
Veronica opened the door wide and stepped backward over the threshold. Her heel caught. With her weight behind the door, it whooshed open, slamming against the wall. She lost her balance. Tumbled and gave a half-laughing scream. Logan lurched forward to catch her, but momentum was pitching her toward the living room floor. He did the only thing he could do—he wrapped his arms around her waist, tucked her against him, and rolled. His back met the floor as she landed on top of him, hip to hip. She giggled into a laugh and propped herself up on her elbow.
“Let me guess,” he said, laying his head on the hardwood. “Is your middle name Grace?”
His job was to watch for creepy, pervy stalkers, but if Jake really wanted Veronica protected, he should’ve sent someone to watch for cracks in the sidewalk.
She smacked him in the chest. “Is your back okay? You hit the ground really hard.”
“Believe me…” Now it was Logan who laughed. “My back is fine.”
“I totally ruined the mood.”
“I wouldn’t say that.” Judging from the massive tent pitching his pants, the mood hadn’t changed at all. He took the tip of Veronica’s ponytail, which dangled in his face, and slipped it over her shoulder. “You saved me from having to sweep you off your feet. Look at that. You’re already there.” 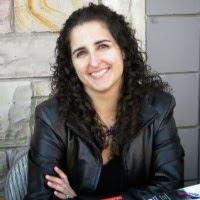 National bestselling author Kristin Miller has had a passion for language and literature her whole life. Born and raised in northern California, she often made up stories about faraway places and edge-of-your-seat adventures. After graduating from Humboldt State University, Kristin taught high school and middle school English, married her college sweetheart, and had two beautiful munchkins. In 2008, she took time off from teaching to raise her children, and started writing while they napped.

Her first novel was published in 2011, and since then she has had eight other novels published with Entangled Covet, Avon/HarperCollins and Harlequin Nocturne. She is the author of the Seattle Wolf Pack series (starting with the national bestselling book Gone with the Wolf), the dark and gritty Vampires of Crimson Bay series and the short-but-steamy Isle of Feralon novellas.
Website: http://kristinmiller.net